New Gold Mining Near Yellowstone Will Be Blocked

The plan withdraws more than 30,000 acres of public lands in the Absaroka mountains for 20 years from new claims for gold, silver, platinum and other "locatable" minerals. 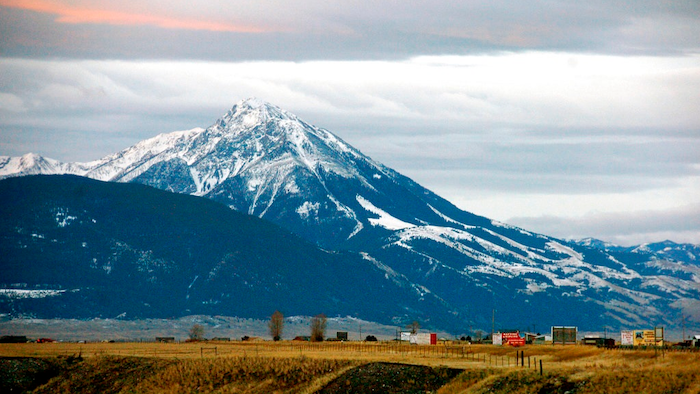 This Nov. 21, 2016, file photo shows Emigrant Peak towering over the Paradise Valley in Montana north of Yellowstone National Park, the day U.S. officials announced a ban on new mining claims across more than 30,000 acres in the area. U.S. government officials are moving forward with a plan to block new gold mining claims for 20 years on more than 30,000 acres of public lands north of Yellowstone National Park. The U.S. Forest Service released a draft environmental assessment on Thursday, March 29, 2018, for the proposed withdrawal of lands in the Absaroka mountains from new claims for gold and other "locatable" minerals, such as silver, platinum and uranium.
AP Photo/Matthew Brown, File

HELENA, Mont. (AP) — U.S. government officials are moving forward with a plan to block new gold mining claims in the mountains north of Yellowstone National Park with Thursday's release of a draft analysis of the proposal's effects on the environment.

The plan to withdraw more than 30,000 acres (12,141 hectares) of public lands in the Absaroka mountains for 20 years from new claims for gold, silver, platinum and other "locatable" minerals has been in the works since 2016, when new exploration was halted for a two-year review.

The plan, driven by gold exploration projects on private lands in the area, is backed by groups, businesses and residents in the area who say it will protect the forested mountains just north of the main gateway of the first U.S. national park.

About 1.7 million people drove through that area last year, and withdrawing that land from new mining development would help protect the areas for wildlife and recreation, according to U.S. Forest Service officials.

The draft environmental assessment released Thursday by the Forest Service examines what would happen to the environment under two scenarios: If new mining were blocked for 20 years and if nothing changed.

There would be less of a disturbance to scenic views, wildlife corridors and recreational opportunities if the proposal goes through, according to the analysis.

By comparison, an estimated 130 acres (53 hectares) of land and 7 miles (11 kilometers) of roads would be built over those 20 years if nothing changes, according to the analysis' "reasonable foreseeable development" scenarios.

That's because withdrawal would affect only public lands, and it would not affect existing mining claims or exploration on private lands within the area. For that reason, some exploration and development is still expected to happen even if new mining claims are blocked, according to the analysis.

The proposal would not hinder the ability to mine for minerals such as coal, oil or gas, though the potential for that kind of development is low, according to Forest Service officials.

After a public comment period of the draft environmental assessment that ends April 29, the Forest Service is expected to release a final report and make a recommendation to U.S. Interior Secretary Ryan Zinke.

Zinke, who favors the plan, is expected to decide whether to approve the plan before November.

"I've been fighting to protect the Paradise Valley and Yellowstone since I represented Montana in Congress," Zinke said Thursday. "I look forward to hearing from the community and seeing how we can work together to protect this area."

Mining companies say the Emigrant and Crevice areas are historical mining districts and they oppose any halt to new exploration. "Half of the nation's hardrock mineral estate is already off-limits or under restrictions for mineral development," Montana Mining Association executive director Tammy Johnson said. "It is unnecessary to withdraw the Emigrant Crevice lands from exploration."

The draft also considered and rejected a third option: blocking new gold and locatable mineral mining forever. The 20-year period is the longest that Zinke is able to block new mining without congressional action, the analysis said.

A group of business owners and residents in the area called the Yellowstone Gateway Business Coalition said they supported the 20-year plan but will keep pushing for a permanent withdrawal of the lands.

How to Find Gold with a Cheap Handheld Biosensor