How to Find Gold with a Cheap Handheld Biosensor

The sensor is the size of a litmus strip, and is designed to be inexpensive, portable, and reusable. 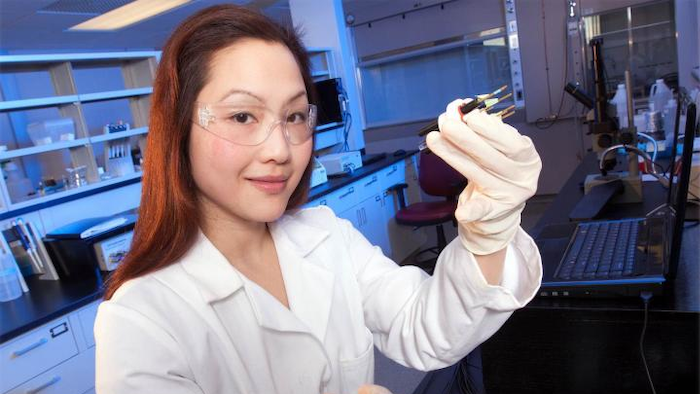 Instead of a pan and a pick ax, prospectors of the future might seek gold with a hand-held biosensor that uses a component of DNA to detect traces of the element in water.

The gold sensor is the latest in a series of metal-detecting biosensors under development by Rebecca Lai, an associate professor of chemistry at the University of Nebraska-Lincoln.

Other sensors at various stages of development detect mercury, silver or platinum. Similar technology could be used to find cadmium, lead, arsenic, or other metals and metalloids.

A primary purpose for the sensors would be to detect water contaminants, Lai said. She cited the August 2015 blowout of a gold mine near Silverton, Colorado, which spilled chemicals into nearby rivers, as well as the ongoing problems with lead-tainted water supplies in Flint, Michigan.

Fabricated on paper strips about the size of a litmus strip, Lai's sensors are designed to be inexpensive, portable and reusable. Instead of sending water samples away for time-consuming tests, people might someday use the biosensors to routinely monitor household water supplies for lead, mercury, arsenic or other dangerous contaminants.

But Lai also is among scientists searching for new and better ways to find gold. Not only aesthetically appealing and financially valuable, the precious metal is in growing demand for pharmaceutical and scientific purposes, including anti-cancer agents and drugs fighting tuberculosis and rheumatoid arthritis.

"Geochemical exploration for gold is becoming increasingly important to the mining industry," Lai said. "There is a need for developing sensitive, selective and cost-effective analytical methods capable of identifying and quantifying gold in complex biological and environmental samples."

Scientists have employed several strategies to find gold, such as fluorescence-based sensors, nanomaterials and even a whole cell biosensor that uses transgenic E. coli. Lai was a co-author of a 2013 study that explored the use of E. coli as a gold biosensor.

DNA, the carrier of genetic information in nearly all living organisms, might seem an unlikely method to detect gold and other metals. Lai's research, however, exploits long-observed interactions between metal ions and the four basic building blocks of DNA: adenine, cytosine, guanine and thymine.

NUtech Ventures, UNL's affiliate for technology commercialization, is pursuing patent protection and seeking licensing partners for Lai's metal ion sensors. She applied for a patent for the sensors in 2014.

"Although these interactions have been well-studied, they have not been exploited for use in electrochemical metal ion sensing," Lai and doctoral student Yao Wu said in a recent Analytical Chemistry article describing the gold sensor.

Lai and Wu say their article is the first report of how oligoadenines -- short adenine chains -- can be used in the design and fabrication of this class of electrochemical biosensors, which would be able to measure concentrations of a target metal in a water sample as well as its presence.

"The detected Au(III) has to come from metallic gold, so if gold is found in a water supply, a gold deposit is somewhere nearby," Lai explained.

The DNA-based biosensors need more refinement before they can be made commercially available, she said.

Lai's sensor works by measuring electric current passing from an electrode to a tracer molecule, methylene blue in this case. In the absence of Au(III), the observed current is high because the oligoadenine probes are highly flexible and the electron transfer between the electrode and the tracer molecule is efficient.

But upon binding to Au(III) in the sample, the flexibility of the oligoadenine DNA probes is hindered, resulting in a large reduction in the current from the tracer molecule. The extent of the change in current is used to determine the concentration of AU(III) in the sample.

To allow the sensor to be reused multiple times, the Au(III) is later removed from the sensor with an application of another ligand.

Lai's research focus is on electrochemical ion sensors. Her research has been supported with grants from the National Institutes of Health and the National Science Foundation.