The Trump administration has repeatedly delayed implementing the rule and had signaled that it might never move forward with it. 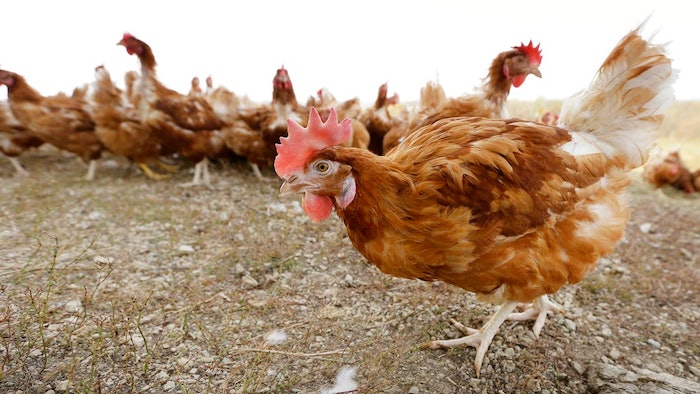 In this Oct. 21, 2015, file photo, cage-free chickens walk in a fenced pasture at an organic farm near Waukon, Iowa. The Trump administration is withdrawing federal rules that would require organic meat and egg producers to abide by stricter animal welfare standards. The U.S. Department of Agriculture announced Monday, March 12, 2018, it would withdraw the Organic Livestock and Poultry Practices final rule published by former President Barack Obama's Agriculture Department two days before he left office in January.
AP Photo/Charlie Neibergall, File

DES MOINES, Iowa (AP) — New rules, decades in the making, that would have required organic meat and egg producers to abide by stricter animal welfare standards were withdrawn by the federal government on Monday, frustrating organic farmers and animal welfare groups but leaving some traditional egg and livestock farm groups rejoicing.

The rule was published by former President Barack Obama's Agriculture Department two days before he left office in January 2017. The administration of Donald Trump has repeatedly delayed implementing the rule and had signaled that it might never move forward with it.

"It's not a surprise. We had some admission by the USDA that the industry had been camping out in their office bending their arms and their ears. It's disappointing. The power of Washington lobbyists wins again," said Francis Thicke, who runs an organic dairy and grows crops in southeastern Iowa near Fairfield.

The regulation was designed to ensure that organically grown livestock had enough space to lie down, turn around, stand up and fully stretch. It also prohibited removal of chicken beaks and cutting cattle tails and required improved living conditions including fresh air, proper ventilation and direct sunlight.

Dropping the rule "reverses the nearly two decades of collaboration and feedback from farmers and consumers," said Matt Bershadker, CEO of the American Society for the Prevention of Cruelty to Animals. "Millions of animals will continue to suffer each year because of the USDA's abdication of its duty to enforce meaningful organic animal welfare standards."

Kansas Republican Sen. Pat Roberts in a statement echoed some in the livestock industry who said the rule would increase the paperwork burden and drive up the cost of production for farmers and ranchers.

"America's organic livestock and poultry producers can now breathe easy that they can maintain the health of their flocks and herds the best way they see fit, and they will not be driven out of business by another government regulation, said Roberts, chairman of the Senate Agriculture Committee.

The withdrawal becomes effective May 13, the USDA said.

The retail market for organic food products was valued at $47 billion in the United States in 2016, and USDA said the number of certified organic operations increased domestically by 7 percent last year.

Thicke said a group of organic farmers in the U.S. have created their own label, the Real Organic Project, and hope to have pilot farms certified this summer with eventual rollout nationally. The group guarantees generous standards for organic animals and not what Thicke considers weak requirements set by the government.