He had been sentenced to 27 years in prison for money laundering. 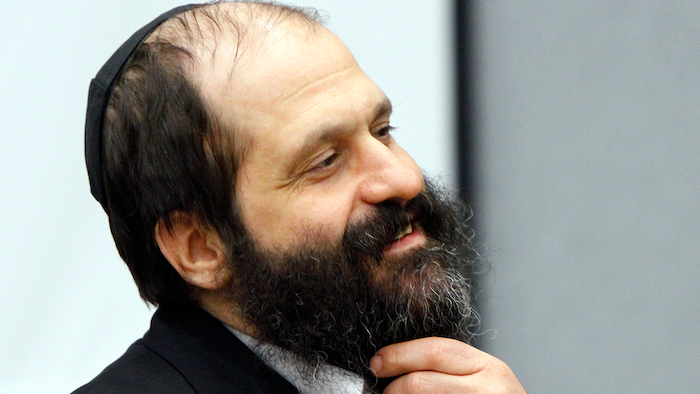 In this June 7, 2010, file photo former Agriprocessors executive Sholom Rubashkin appears at the Black Hawk County Courthouse in Waterloo, Iowa. President Donald Trump on Dec. 20, 2017, commuted the prison sentence of Rubashkin, a Iowa kosher meatpacking executive sentenced to 27 years in prison for money laundering — the first time he's used the presidential power. The decision to intervene on behalf of Rubashkin, who ran the Iowa headquarters of a family business that was the country's largest kosher meat-processing company, came at the urging of multiple members of Congress and other high-ranking officials who argued Rubashkin's sentence was too harsh, the White House said.
Matthew Putney/The Courier via AP

WASHINGTON (AP) — President Donald Trump on Wednesday commuted the sentence of an Iowa kosher meatpacking executive who had been sentenced to 27 years in prison for money laundering, marking the first time he's used the presidential power.

The decision to intervene on behalf of Sholom Rubashkin, who ran the Iowa headquarters of a family business that was the country's largest kosher meat-processing company, came at the urging of numerous members of Congress and a long list of high-ranking law enforcement officials, who argued the sentence was far too harsh for a first-time, nonviolent offender.

The action was "encouraged by bipartisan leaders from across the political spectrum, from Nancy Pelosi to Orrin Hatch," the White House said.

Rubashki was convicted in 2009 for submitting fake invoices to a bank that made Agriprocessors' finances appear healthier than they were so that it could borrow more. His prosecution came after federal authorities raided the plant and arrested 389 illegal immigrants in 2008.

The 57-year-old father of 10 has served more than eight years of his sentence, according to the White House, which stressed the action is not a presidential pardon and does not vacate Rubashkin's conviction.

Trump has used his pardon power just once so far: to spare former Arizona Sheriff Joe Arpaio the prospect of serving jail time by wiping away a federal conviction stemming from immigration patrols that focused on Latinos.

"The sentence previously imposed was unfair, unjust and essential a life sentence," he said via email. "President Trump has done what is right and just. The unrelenting efforts on Rubashkin's behalf have finally paid off."

Rubashkin's attorneys last year accused prosecutors of improperly interfering with the sale of Agriprocessors and depressing its sale price by millions. The drop in value left Agriprocessors' bank with a $27 million loss — a figure used to calculate Rubashkin's sentence under federal guidelines. The U.S. attorney's office denied the allegations.

The White House said the president's decision to review Rubashkin's sentence was driven by concerns raised by a bipartisan group of more than 100 former high-ranking law enforcement and Justice Department officials, including multiple former attorneys general, as well as prosecutors, judges, and legal scholars.

"Mr. Rubashkin is a devoted husband and father, a deeply religious man who simply doesn't deserve a sentence of this length, or anything remotely close to it," they wrote in a letter that urged Trump to use his "executive clemency power to commute the patently unjust and draconian 27-year sentence imposed upon Sholom Rubashkin_a first time, non-violent offender and father of 10, including an acutely autistic child."

More than 30 current members of Congress also submitted letters to the White House supporting a review of Rubashkin's case.

But former prosecutor Bob Teig, who retired in 2011 after serving as a prosecutor and spokesman for the U.S. attorney's office for the Northern District of Iowa, said Trump's decision to commute Rubashkin's sentence "makes no sense" given Trump's repeated promises to get tougher on illegal immigration.

Teig said that every court that looked at Rubashkin's sentence had concluded it was fair, and suggested that former Justice Department officials and lawmakers who supported leniency were unaware of the facts of the case.

"The outrage is backwards," he said.