The unprecedented change to the usual judicial process drew criticism. 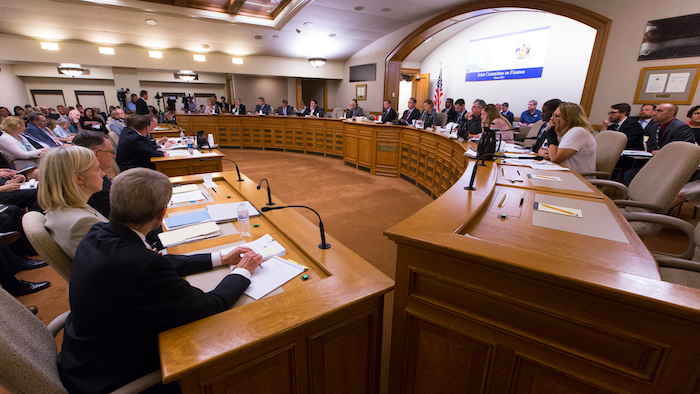 In this Aug. 3, 2017 photo, the Wisconsin Assembly Committee on Jobs and Economy meets about the incentive deal for Taiwan-based Foxconn Technology Group, at the state Capitol in Madison, Wis. The Legislature may change state law to expedite court appeals involving the proposed plant to be built by Foxconn. The budget-writing committee was to vote on a proposal Tuesday, Sept. 5, 2017, that would require the state Supreme Court to hear any appeals of circuit court rulings involving Foxconn.
Mark Hoffman/Milwaukee Journal-Sentinel via AP File

The unprecedented change to the usual judicial process drew criticism from Democrats, who also blasted the $3 billion incentives as a corporate welfare giveaway. But they didn't have the votes needed to stop the proposal.

The Republican-controlled committee approved the bill on a party line 12-4 vote. The state Senate planned to vote on it Sept. 12, with the Assembly expected to quickly follow. Both are under GOP control.

The Assembly approved it last month, but will have to vote again since the committee changed the measure which amounts to the largest state tax break to a foreign corporation in U.S. history. It must pass both houses of the Legislature in the same form before going to Gov. Scott Walker for his signature.

Taiwan-based Foxconn signed a deal with Wisconsin to invest up to $10 billion in the state on a massive flat-screen manufacturing campus that could employ up to 13,000 people. The plant is to be built in southeastern Wisconsin and be open as soon as 2020, although Foxconn has not identified its exact location yet.

"This is probably the biggest thing to happen to Wisconsin since the cow," Republican budget committee co-chair Rep. John Nygren said Tuesday.

Proponents say the plant offers a once-in-a lifetime opportunity for the state, while critics say the state is giving away too much with the $3 billion incentive package. The bill also waives environmental regulations that will allow Foxconn to build in wetland and waterways and construct its 20-million-square-foot campus without first doing an environmental impact statement.

The incentive package would provide Foxconn with $2.85 billion in cash payments to Foxconn, over a 15-year period, tied to creating jobs and investment totals. Foxconn can also qualify for an additional $150 million in sales tax breaks for construction material.

It will take at least 25 years for the state to recoup the money it pays out in credits to Foxconn, according to an analysis by the nonpartisan Legislative Fiscal Bureau.

The budget committee on Tuesday approved requiring that the Wisconsin Economic Development Corp. create "hiring goals" tied to $1.35 billion in capital investment credits. No specific hiring goals are specified in the bill.

Democrats on the budget committee objected to a Republican-backed change allowing any lawsuit involving Foxconn to be appealed directly to the Wisconsin Supreme Court, skipping the state appeals court. No other Wisconsin business is granted that expedited appeals process. It would also require any lower court ruling to be put on hold pending action from the Supreme Court, which conservatives control 5-2. Under current law, a judge must put a ruling on hold while an appeal is pending.

"This is truly disturbing," said Democratic Sen. Lena Taylor, an attorney and member of the budget committee.

Lawsuits are expected challenging changes to environmental regulations proposed under the bill.

Democratic Rep. Katrina Shankland said the proposal sending appeals directly to the Wisconsin Supreme Court "appears to be rigging the game for one foreign company."

Walker, speaking to reporters in Sheboygan Falls, said he was "more than willing to work with" lawmakers on changes to the Foxconn bill with the goal of signing it later this month. Walker didn't comment on the specific changes approved by the committee Tuesday.