Though $86 million less than what the state requested, Gov. Scott Walker said it was still "great news." 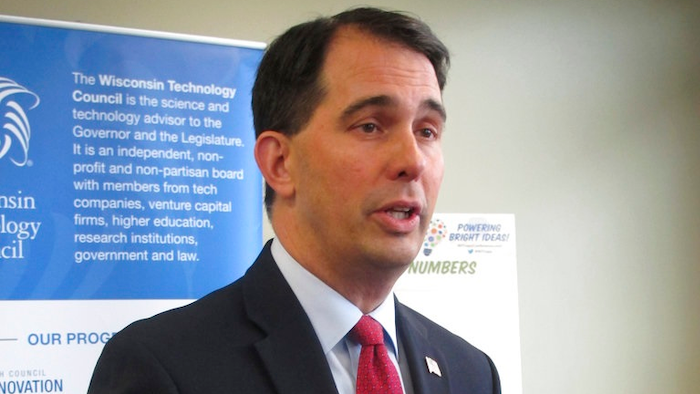 Wisconsin Gov. Scott Walker speaks at a news conference Wednesday, June 6, 2018, in Madison, Wis. He says news that the state will receive $160 million in federal funding for work on Interstate 94 between Milwaukee and Illinois will help ensure the project is complete by 2021.
AP Photo/Scott Bauer

MADISON, Wis. (AP) — The state of Wisconsin will be receiving $86 million less than what it requested from the federal government to pay for upgrades and expansion of Interstate 94 south of Milwaukee, but Gov. Scott Walker said Wednesday work will still be done by 2021.

The state has an aggressive schedule for 36 miles of I-94 from Milwaukee south to the Illinois border, just west of Mount Pleasant where the massive $10 billion Foxconn campus is to be located. Foxconn plans a groundbreaking ceremony later this month on the factory that is to make liquid crystal display screens and will increase the volume of ground transport in the area.

The state in October applied for $246 million under the Infrastructure for Rebuilding America grant with the U.S. Department of Transportation, enough to pay for half of the remaining costs of the project. Walker and Democratic U.S. Sen. Tammy Baldwin announced Wednesday the state received $160 million, only 65 percent of what it requested but still the largest award ever given to the state and the second largest given to any state in this round.

Walker called it "great news for the state of Wisconsin."

"A hundred and sixty million dollars that didn't solely come out of the state taxpayers but came from the federal government certainly is a boost for us," said Walker, who is running for re-election in November.

His office said the money will allow for all lanes of traffic on the heavily traveled I-94 north/south corridor to be open to traffic by Memorial Day of 2020 with full completion of the project by 2021.

While Walker touted the project as being ahead of schedule, the long-delayed highway work was originally supposed to be done by 2016.

Walker spokesman Tom Evenson said the $86 million difference between what was requested and what was received will be made up from cash balances from transportation revenue bonds.

"No projects anywhere else around the state are being diverted to complete I-94," Evenson said.

Patrick Goss, executive director of the Wisconsin Transportation Builders Association, said he believed the project would remain on schedule to be fully completed by 2021 even with a lesser grant award than requested.

"If they're saying they've got the money, my members will get the work done," Goss said.

The improvements include adding an extra lane in both directions of I-94, which goes through Kenosha, Racine and Milwaukee counties. The state is anxious to complete the work as Foxconn ramps up construction of its campus that could grow to employ 13,000 people.

In its application for the federal grant, the state emphasized the economic benefits of improved traffic flow around the planned Foxconn plant.

"This investment will ensure that the I-94 freeway can continue to play a vital role in helping manufacturers and small businesses transport their products to the markets they serve, connecting workers to job opportunities and strengthening our Made in Wisconsin economy," Baldwin said in a statement announcing the grant.

Does WI Have the Right Workers?