Building trade groups had urged Trump to revoke an Obama-era order pertaining to projects built on flood plains, saying it was overly bureaucratic and increased costs. 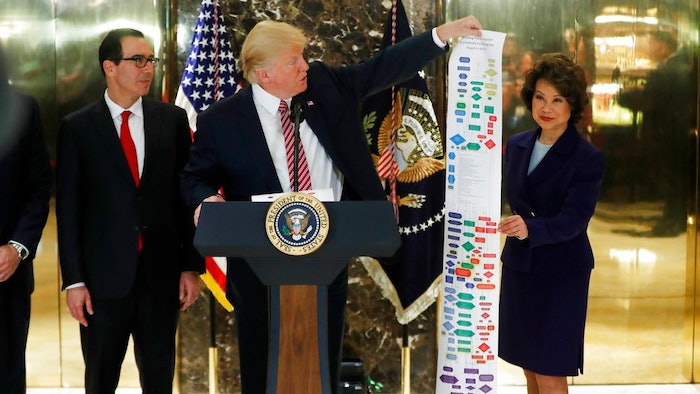 WASHINGTON (AP) — President Donald Trump said Tuesday he has signed a new executive order intended to make more efficient the federal permitting process for construction of transportation, water and other infrastructure projects without harming the environment.

Describing his action, Trump said projects will still be subjected to environmental safeguards.

Building trade groups had urged Trump to revoke the flood plain order, saying it was overly bureaucratic and increased the cost of projects. The Obama order was especially unwieldy because it didn't standardize across the government how sea level rise was to be taken into account, which left each federal agency to come up with its own standards, said Jimmy Christianson, an attorney with the Associated General Contractors.

A recent draft of an upcoming report from scientists representing 13 federal agencies say sea levels along U.S. coastlines could rise by more than one foot on average by 2050, potentially more in the Northeast and western Gulf of Mexico. A projected increase in the intensity of hurricanes in the North Atlantic will increase the probability of "extreme coastal flooding."

Environmentalists said Tuesday that ignoring the reality of the Earth's changing climate is shortsighted.

"What this order will do is ensure that we will waste more taxpayer money because federal agencies will no longer have to consider long-term flood risks to federally funded infrastructure projects," said Jessica Grannis, who manages the adaptation program at the Georgetown Climate Center.

The president, speaking at a news conference at Trump Tower in New York, said it can cost hundreds of millions of dollars and 17 years to approve an ordinary highway project because of burdensome regulations. Under Trump's order, agencies must complete environmental reviews of projects within two years on average. Trump signed another executive order on streamlining environmental and public reviews of infrastructure projects his first week in office.

"We used to have the greatest infrastructure anywhere in the world. And today we're like a third-world country," Trump said, using a term referring to the economically developing nations of Africa, Asia and Latin America.

A report by the Transportation Department's inspector general this spring found that although the department had completed work necessary to implement a majority of the 42 streamlining provisions in the 2012 law, they had still not been implemented because regulators had to make changes to comply with the requirements of the 2015 law.

Shannon Eggleston, the American Association of State, Highway and Transportation Officials' program director for environment, said there is still room to make adjustments to the processes for complying with laws protecting endangered species and air quality that won't hurt the environment.