The man is accused of illegally disposing hundreds of filter socks, which are used to strain the sometimes-radioactive fluids produced during oil and gas exploration. 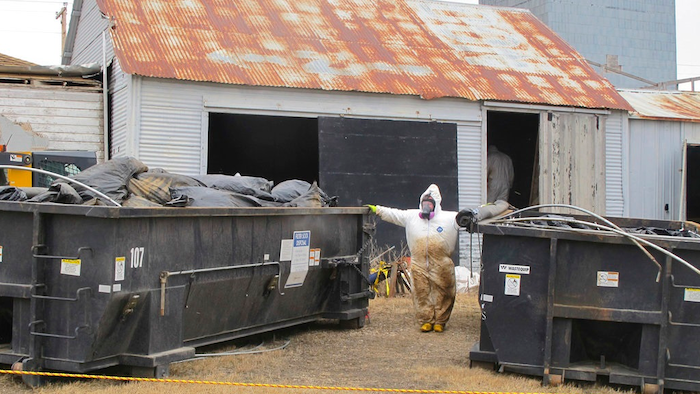 In this file photo taken April 23, 2014, white-suited workers wearing respirators clean up the illegal filter sock dump in an abandoned gas station in Noonan, N.D., near the Canadian border. Federal officials say fugitive James Ward, who escaped custody in Wyoming four years ago, is being sought for the illegal dumping of radioactive oilfield waste in North Dakota.
Lauren Donovan/The Bismarck Tribune via AP

BILLINGS, Mont. (AP) — A fugitive who escaped custody in Wyoming four years ago has been added to a list of U.S. environmental crimes fugitives and is being sought by investigators for illegally dumping radioactive oilfield waste in North Dakota in incidents dating back to 2011, authorities said Tuesday.

James Kenneth Ward, 55, is considered violent and dangerous and should not be approached, the U.S. Environmental Protection Agency's Criminal Investigation Division said in a statement.

Prosecutors said Ward beginning in 2011 illegally disposed of hundreds of pieces of radioactive oil field waste known as filter socks, which are used to strain the sometimes-radioactive fluids produced during oil and gas exploration. Filter socks are tubular nets used to strain polluted water that is a byproduct of oil production. The wastewater contains low amounts of radioactive material such as radium.

Instead of bringing the filter socks to a licensed landfill, prosecutors allege Ward dumped them inside an abandoned gas station just south of the Canada border in Noonan, North Dakota, where they were discovered in March 2014a. The site was later cleaned up and the filters were transferred out of state for disposal.

EPA spokesman Richard Mylott did not directly respond to email and telephone messages seeking comment about why Ward was considered dangerous and why he had been added to the fugitive list three years after he was linked to the illegal dumping. Instead, he provided a copy of an indictment for Ward that did not answer those questions.

North Dakota state health officials several years ago reported finding the filters along roadsides, in abandoned buildings and in commercial trash bins. Authorities discovered a second major illegal dumping site for the filters in the nearby small North Dakota city of Crosby about two months after the Noonan site was found.

The cases highlighted the state's struggles to deal with the environmental effects of an energy boom that has since slowed after oil prices plummeted.

Ward was indicted in April in U.S. District Court in Montana on charges of wire fraud and conspiracy to commit wire fraud for taking payments on the filters that were illegally dumped. He faces a combined maximum penalty of 25 years in prison if convicted on both counts.

After disposing of the filter socks, Ward allegedly took payments from Zenith Produced Water LLC, the Colorado-based company that produced the waste, and he and an associate deposited checks totaling roughly $10,000 including at a bank in Deer Lodge, Montana, according to the indictment.

Ward has not been seen since September 2013, when he escaped from a private corrections company during a prison transport when the van he was in stopped at a rest area, according to the EPA and media reports.

At the time, Ward was being brought from Arizona to Wyoming to face state larceny charges for allegedly stealing more than $100,000 from a Wyoming trucking company in 2010, according to media reports.

Prior to Ward's 2013 arrest he had been hiding out in northern Mexico, according to the EPA.

Zenith Produced Water originally faced a proposed $800,000 fine in the illegal dumping case. The amount was later reduced to $20,000 in a settlement with North Dakota regulators. Calls Tuesday to a number listed for the company went to a fax.

Glatt said there have been no filter sock illegal dumping cases since the new disposal rules went into effect several years ago.

"That took care of a lot of the issues," Glatt said. "When you're done, you take a few steps and drop it into a disposal container. The incentive to dispose of filter socks anyplace else is not there anymore."

Many Remain in ND, Despite Oil Slide