Consumer groups and civil rights advocates said the bill penalizes those who have been mistreated by corporations. 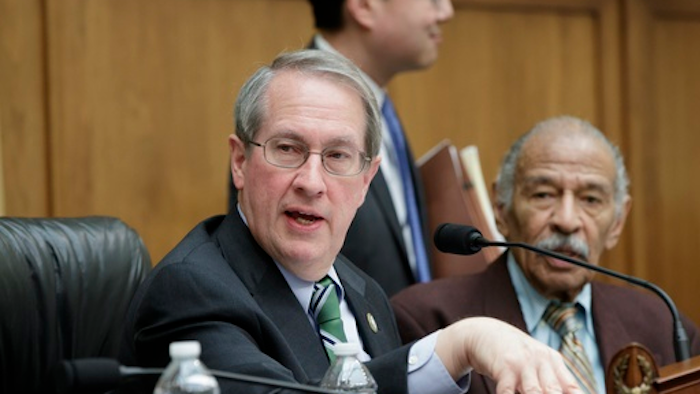 WASHINGTON (AP) — The House has approved a bill that would make it harder for individuals or groups to bring legal claims against companies in consumer disputes, employment discrimination cases and other areas.

Lawmakers approved the Republican-sponsored measure, 220-201, Thursday night. The bill heads to the Senate, where its prospects are less clear.

The legislation is the latest in a flurry of business-friendly moves by Congress and the Trump administration. Changes mandated in the bill could help reduce legal costs for businesses by putting up more hurdles to bringing class-action lawsuits in federal court.

Supporters say the bill is needed to curb abuses in class-action suits that often result in a huge payday for lawyers.

"The class-action litigation system has morphed into an expensive enterprise where lawyers are often the only winners, and American businesses and consumers are the losers," said Rep. Bob Goodlatte, R-Va., chairman of the House Judiciary Committee and the bill's primary author. "Trial lawyers often profit at the expense of deserving victims."

Consumer groups and civil rights advocates said the bill penalizes those who have been mistreated by corporations.

"This devastating Republican attack on our federal and state civil courts will severely restrict the hallowed right of the American people to have their day in court when they are wrongfully injured or defrauded," said veteran consumer advocate Ralph Nader.

The bill would ensure that "judges' and juries' hands are tied by absentee politicians in Washington, greased by corporate campaign contributions," Nader said.

Nader and other critics point to a history of cases in which class-action suits enabled consumers to recoup losses and compelled companies to stop selling unsafe products. A recent example: a suit by Volkswagen owners in the U.S. who won about $11 billion in compensation from the German company in its emissions cheating scandal.

The bill would require individuals seeking to form a legal class to show that each of them suffered the same type and magnitude of personal injury or economic loss as the group's leader. Attorneys in winning class-action suits couldn't collect payment from companies until after the individuals in the class are paid.

Republican lawmakers have long cherished the idea of overhauling the legal system. They've looked to rein in trial lawyers — key campaign donors as a group to Democrats — whom they portray as greedy and abusing a system tilted toward them. Corporations and businesses, which tend to donate more heavily to Republican candidates, are championed by the GOP lawmakers as bearing excessive legal burdens and costs that raise prices for consumers.