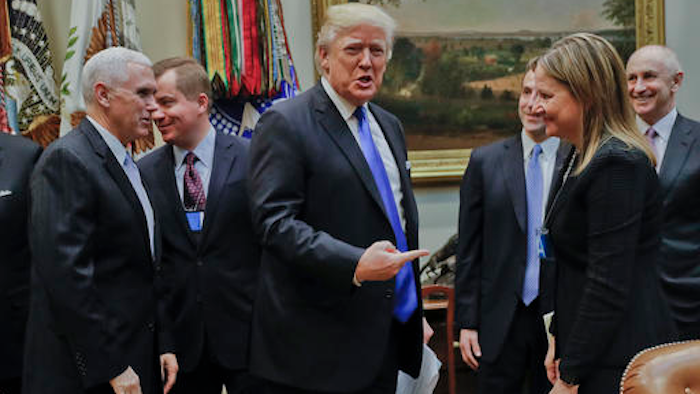 President Donald Trump gestures towards GM CEO Mary Barra, right, before the start of a meeting with automobile leaders in the Roosevelt Room of the White House in Washington, Tuesday, Jan. 24, 2017. From left are, Vice President Mike Pence, left, and Matt Blunt, president of the American Automotive Policy Council and the former governor of Missouri.
AP Photo/Pablo Martinez Monsivais

President Donald Trump has signed executive actions to advance the construction of the Keystone XL and Dakota Access oil pipelines.

Trump told reporters in the Oval Office that the moves on the pipelines will be subject to the terms and conditions being renegotiated by the U.S.

The Keystone pipeline would run from Canada to U.S. refineries in the Gulf Coast. The U.S. government needs to approve the pipeline because it crossed the border.

The Army decided last year to explore alternate routes for the Dakota pipeline after the Standing Rock Sioux tribe and its supporters said the pipeline threatened drinking water and Native American cultural sites.

All the President's Pens