All the President's Pens

Cross has supplied the fancy writing instruments since the Ford administration, but President Trump is running low on the gold-plated pens. 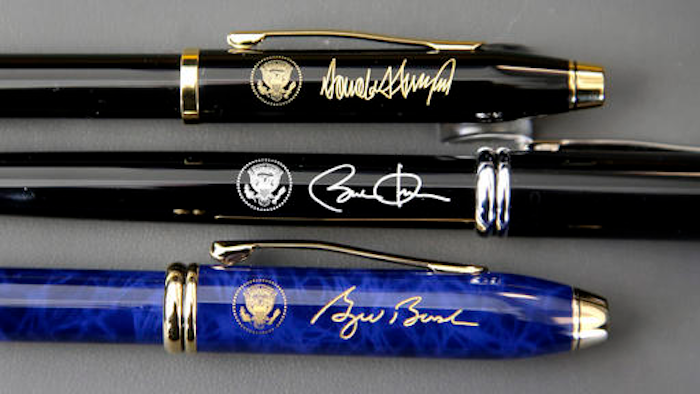 PROVIDENCE, R.I. (AP) — It didn't take long for President Donald Trump to start running out of the custom-made Cross pens he uses to sign executive orders.

"I think we're going to need some more pens, by the way," he said on Inauguration Day four weeks ago. Trump was handing them out as souvenirs for members of Congress who attended his first signing ceremony, joking to the lawmakers that "the government is getting stingy, right?"

The White House expected its latest batch of 350 of the gold-plated pens by Friday. They were shipped Wednesday by the 170-year-old New England company that has supplied its fancy pens to at least seven U.S. presidents. But Trump might be the first to make brandishing a pen and showing off each newly signed order such a definitive part of his governing style.

"He absolutely, positively, had to have them by Friday," said Andy Boss, who manages business gift sales for A.T. Cross Co., based in Providence, Rhode Island. "My guess is he's running low."

Cross pens have been supplied to presidents at least since the Gerald Ford administration, said Boss, whose great-grandfather bought the writing instruments manufacturer a century ago. The company, sold to a private equity firm in 2013, was once a major Rhode Island employer but now makes most of its pens in China. It still tries to put an American imprint on the presidential pens, which are lacquered and engraved in China but go through their final assembly in Rhode Island using a mix of domestic and foreign parts.

Trump's transition team ordered its first 150 of the black-lacquered pens before the inauguration. The only features distinguishing Trump's Century II pens from Obama's are their engraved signatures and their metal plating: gold instead of chrome.

The White House didn't return emailed requests for comment this week about the cost of the pens and whether it matters to Trump where the pens are made. The manufacturer's suggested retail price is $115 per pen, but Boss said it's sold to the White House through a third-party distributor that is likely to have offered a discount.

The company began working in October to design its 2017 presidential inauguration pens for Democrat Hillary Clinton, thinking she would be president. When Trump won November's election, the company and its distributor dropped their work with the Democratic National Committee and sent samples to the Trump team instead.

Boss said the company hasn't received much pushback over its work with Trump, who has used Cross pens to sign orders that have temporarily suspended the nation's refugee program, blocked travel from seven Muslim-majority countries and expanded immigration enforcement, among other things.

Boss said he thinks Trump "could probably polish himself a little more and be a little more statesmanlike." But he said the company has supplied pens to presidents of both parties.

"To me it doesn't matter whether the president is a Republican or a Democrat. Just having a president using our pens is pretty cool," Boss said. "I'd much rather him using our pens than somebody else's."