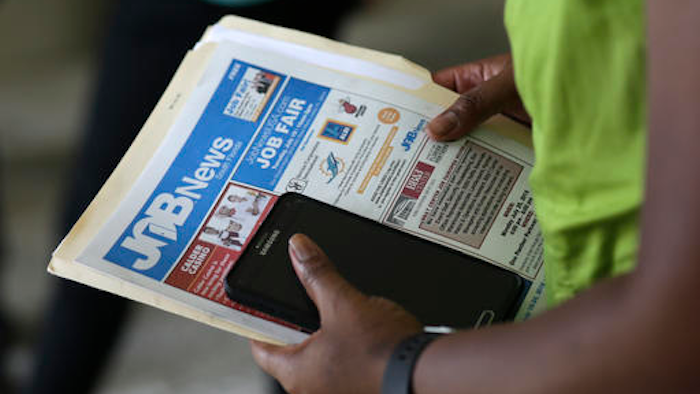 WASHINGTON (AP) — U.S. employers posted fewer jobs in October than the previous month, but job openings are still at a mostly healthy level that points to steady hiring ahead.

Job openings slipped 1.8 percent to 5.5 million, the Labor Department said Wednesday. Hiring also fell to just under 5.1 million, while the number of people quitting declined to about 3 million.

While solid, the data weakened from September, suggesting that hiring is unlikely to accelerate beyond its current moderate pace anytime soon. Growth has been sluggish for most of this year, though it picked up in the July-September quarter.

Last week's jobs figure is a net gain after layoffs, quits and retirements are subtracted from overall hiring.

Wednesday's data comes from the Job Openings and Labor Turnover survey, or JOLTS, and are more detailed and provide a fuller view of the job market.

Job openings fell the most in professional and business services, which includes largely higher-paying jobs in areas such as engineering, accounting and information technology. They also dropped in construction, financial services, and in hotels and restaurants. Openings rose in retail and health care.

The gap between job openings and hiring is a sign that companies may be struggling to find the qualified workers they need. The number of available jobs has risen 2 percent in the past year, while total hiring has dropped 2.2 percent. With the unemployment rate low, companies have a smaller pool of available workers to choose from.

That disparity may force employers to offer higher pay in order to attract more applicants to fill those openings. That could accelerate pay increases nationwide.

The number of Americans quitting their jobs fell in October but has jumped 6.8 percent in the past year, a positive sign that could also push wages higher. Quitting is generally a sign of confidence in the job market and typically occurs when employees leave for another job at higher pay. Quitting can also increase as employers actively recruit workers who already have jobs.

Manufacturing Among Top Sectors for Jobs