California is looking for ways to reduce methane from the bodily functions of cows, but critics are worried dairy farms will flee to other states with fewer regulations. 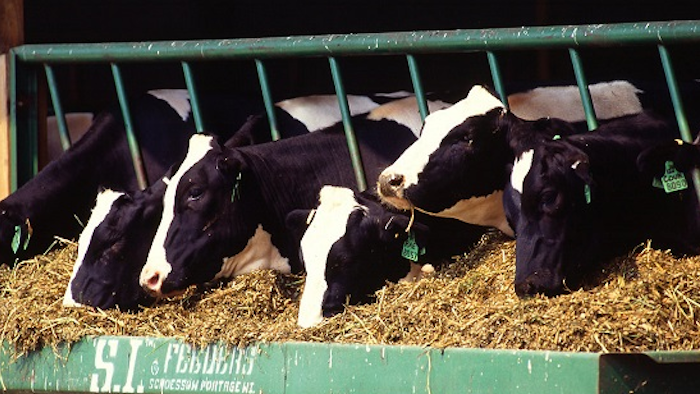 Livestock are responsible for 14.5 percent of human-induced greenhouse gas emissions, with beef and dairy production accounting for the bulk of it, according to a 2013 United Nations report.

GALT, Calif. (AP) — California is taking its fight against global warming to the farm. The nation's leading agricultural state is now targeting greenhouse gases produced by dairy cows and other livestock.

Despite strong opposition from farmers, Gov. Jerry Brown signed legislation in September that for the first time regulates heat-trapping gases from livestock operations and landfills.

Cattle and other farm animals are major sources of methane, a greenhouse gas many times more potent than carbon dioxide as a heat-trapping gas. Methane is released when they belch, pass gas and make manure.

"If we can reduce emissions of methane, we can really help to slow global warming," said Ryan McCarthy, a science advisor for the California Air Resources Board, which is drawing up rules to implement the new law.

Livestock are responsible for 14.5 percent of human-induced greenhouse gas emissions, with beef and dairy production accounting for the bulk of it, according to a 2013 United Nations report.

Since the passage of its landmark global warming law in 2006, California has been reducing carbon emissions from cars, trucks, homes and factories, while boosting production of renewable energy.

In the nation's largest milk-producing state, the new law requires dairies and other livestock operations to reduce methane emissions 40 percent below 2013 levels by 2030. State officials are developing the regulations, which take effect in 2024.

"We expect that this package ... and everything we're doing on climate, does show an effective model forward for others," McCarthy said.

But dairy farmers say the new regulations will drive up costs when they're already struggling with five years of drought, low milk prices and rising labor costs. They're also concerned about a newly signed law that will boost overtime pay for farmworkers.

"It just makes it more challenging. We're continuing to lose dairies. Dairies are moving out of state to places where these costs don't exist," said Paul Sousa, director of environmental services for Western United Dairymen.

The dairy industry could be forced to move production to states and countries with fewer regulations, leading to higher emissions globally, Sousa said.

"We think it's very foolish for the state of California to be taking this position," said Rob Vandenheuvel, general manager for the Milk Producers Council. "A single state like California is not going to make a meaningful impact on the climate."

Regulators are looking for ways to reduce so-called enteric emissions — methane from the bodily functions of cows. That could eventually require changes to what cattle eat.

But the biggest target is dairy manure, which accounts for about a quarter of the state's methane emissions.

State regulators want more farmers to reduce emissions with methane digesters, which capture methane from manure in large storage tanks and convert the gas into electricity.

The state has set aside $50 million to help dairies set up digesters, but farmers say that's not nearly enough to equip the state's roughly 1,500 dairies.

New Hope Dairy, which has 1,500 cows in Sacramento County, installed a $4 million methane digester in 2013, thanks to state grants and a partnership with the local utility, which operates the system to generate renewable power for the grid.

But co-owner Arlin Van Groningen, a third-generation farmer, says he couldn't afford one if he had to buy and run it himself.

"The bottom line is it's going to negatively impact the economics of the California dairy industry," Van Groningen said of the new law. "In the dairy business, the margins are so slim that something like this will force us out of state."

State officials say they're committed to making sure the new regulations work for farmers and the environment.

"There's a real opportunity here to get very significant emissions reductions at fairly low cost, and actually in a way that can bring economic benefits to farmers," Ryan said.