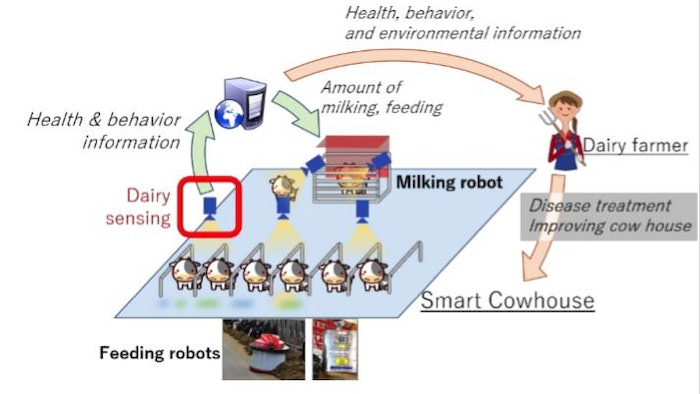 A group of researchers led by Osaka University developed an early detection method for cow lameness (hoof disease), a major disease of dairy cattle, from images of cow gait with an accuracy of 99% or higher by applying human gait analysis.

This technique allows early detection of lameness from cow gait, which was previously difficult. It is hoped that a revolution in dairy farming can be achieved through detailed observation by AI-powered image analysis.

Dairy farmers are busy with routines such as cleaning cowsheds, milking, and feeding, so it’s very difficult to determine the condition of cows. If this continues, they will remain too busy to ensure the quantity and quality of milk and dairy products.

A group of researchers led by Professor Yagi Yasushi at the Institute of Scientific and Industrial Research, Osaka University, together with Professor Nakada Ken at Rakuno Gakuen University, developed a technique for monitoring health of dairy cattle with high frequency and accuracy in the farmers’ stead by using a camera and AI with the aim of realizing a smart cowhouse (Figure 1, view photos in gallery).

Hoof health is an important aspect of proper dairy cattle care. Injuries and illnesses of hooves, called ‘lameness’, if left untreated, will lead not only to declining quantity and quality of dairy products, but also to life-threatening disease. Thus, its early detection is very important. Indicators for lameness are manifested in back arch and gait patterns of cows. Methods for finding lameness by detecting back arch had been studied; however, that method was effective in detecting moderate to severe lameness.

This group established a method for the early detection of lameness from cow gait images with an accuracy of 99% or higher by using their own human gait analysis technique.

Specifically, this group waterproofed and dustproofed Microsoft Kinect, a camera-based sensor capable of measuring distance to an object (Figure 2), and set it in a cowshed at Rakuno Gakuen University. Based on the large number of cow gait images taken by this sensor, this group characterized cow gaits (Figure 3), detecting cows with lameness through machine learning.

“Our achievements will mark the start of techniques for monitoring cows using AI-powered image analysis,” says Professor Yagi. “This will contribute largely to realizing a smart cowhouse interlocked with an automatic milking machine and feeding robot, both of which have already been introduced to some dairy farms, as well as wearable sensors attached to cows under study.” He continues, saying, “By finely adjusting the amount of expressed milk and the amount of feed as well as by showing farmers cow conditions in detail through automatic analysis of cow conditions, we can realize a new era of dairy farming in which farmers can focus entirely on health management of their cows and delivering high-quality dairy products.”