The NHTSA has received 25 complaints alleging sudden brake loss in the trucks. 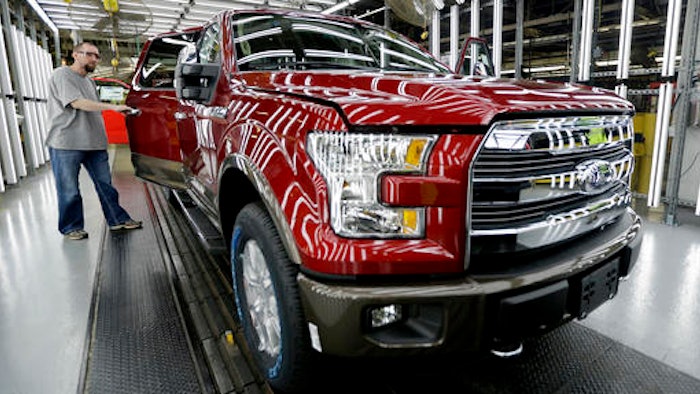 In this March 13, 2015, file photo, a worker inspects a new 2015 aluminum-alloy body Ford F-150 truck at the company's Kansas City Assembly Plant in Claycomo, Mo. U.S. safety regulators are investigating whether a recall of Ford F-150 pickup trucks for brake failures should be expanded to more model years. The probe covers about 282,000 pickups with 3.5-liter six-cylinder engines from 2015 and 2016.
AP Photo/Charlie Riedel, File

DETROIT (AP) — U.S. safety regulators are investigating whether a recall of Ford F-150 pickup trucks for brake failures should be expanded to more model years.

The probe covers about 282,000 pickups with 3.5-liter six-cylinder engines from 2015 and 2016. The National Highway Traffic Safety Administration says it has received 25 complaints alleging sudden brake loss in the trucks. No crashes or injuries were reported.

In May, Ford recalled about 271,000 six-cylinder F-150s from 2013 and 2014 because brake fluid could leak from the master cylinder and cause brake failure.

The safety agency says it received 10 complaints about 2015 brake failures and another 15 about the 2016 models. Investigators will decide if the 2015 and 2016 models should be added to the recall. The F-series pickup is the top-selling vehicle in the U.S.

Ford says it's cooperating in the investigation. "We continuously evaluate our processes for potential improvements and when the data indicates a safety recall is needed, we move quickly on behalf of our customers," the company said in a statement.

In one of the complaints, a driver from Loxahatchee, Florida, told NHTSA that the brakes failed July 22 while the truck was on the Florida Turnpike. The person, who was not identified in the agency's complaint database, tried to slow for stopped traffic and the pedal went all the way to the floor, the complaint said. "I put it in neutral and swerved onto the side of the road to avoid hitting traffic at 70 mph," the driver wrote. The truck was taken to the nearest dealership, where the owner was told that the master brake cylinder was failing and it was a known problem. "Why is there not a recall? I could have killed somebody," the driver wrote.

The investigation is the third probe of Ford vehicles announced by NHTSA in the past two days.

On Monday the agency posted documents detailing investigations into power steering problems with the 2010 Ford Fusion and door latch sensor troubles with the 2011 to 2013 Ford Edge.