Officials say deal would lead to greater investments in technology that could help American farmers. 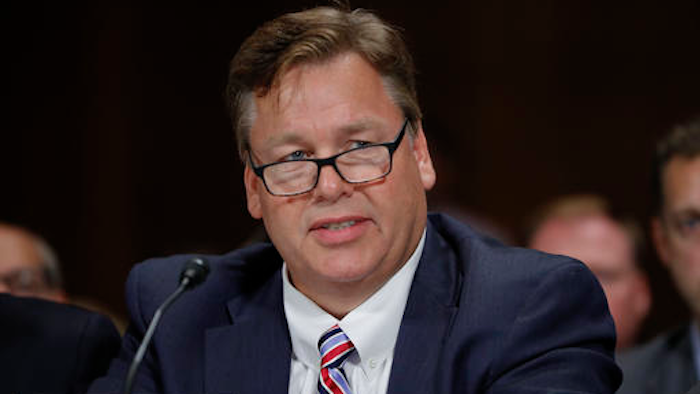 WASHINGTON (AP) — Top officials for Monsanto and Bayer defended their proposed $66 billion merger before skeptical senators on Tuesday, insisting that the deal would lead to greater investments in technology that could help American farmers.

Monsanto, the American seed and weed-killer, and Bayer, the German medicine and farm-chemical maker, responded to concerns from Iowa Sen. Charles Grassley, the Republican chairman of the Senate Judiciary Committee.

Grassley warned that consolidation and competition in the U.S. seed and agrochemical industry could hurt American farmers who are already dealing with an economic downturn.

"I'm afraid this consolidation wave has become a tsunami," Grassley said as the hearing opened.

After months of negotiations, St. Louis-based Monsanto Co. last week accepted an offer from Leverkusen, Germany-based Bayer AG that will pay $57 billion to Monsanto shareholders and assume $9 billion in Monsanto debt. The deal combines two of the six U.S. and European companies that dominate the agrochemical market, and would create a global agricultural and chemical giant with a broad array of products.

Robb Fraley, executive vice president and chief technology officer of Monsanto, and Jim Blome, president and CEO of Bayer CropScience North America, both testified that the combined investment is needed to meet a rising food demand.

"This type of change enables more innovation and delivers better products to the farm even faster," Fraley said. "Farmers are best served when companies invest more in new technologies and accelerate the pace of their (research and development), which in turn spurs robust competition."

Blome noted that Monsanto has a greater presence in North America while Bayer's business is greater outside of North America.

Grassley pointed to lower crop prices and higher seed prices, saying farmers are under "tremendous pressure" as the agriculture economy has slowed in the last couple of years.

The Iowa senator said antitrust regulators should closely watch consolidation of the agricultural biotech industry and coordinate oversight between agencies. He said the Federal Trade Commission is currently reviewing another merger between Syngenta AG and the China National Chemical Corp. and the Justice Department is looking at the merger of Dow Chemical and DuPont.

"The innovations of the companies in this room today have helped the world reach productivity levels which ease fears over meeting the long-term demands of our growing global population," Grassley said. "However, when does the size of companies and concentration in the market reach the tipping point, so much that a market becomes anti-competitive?"

Executives from Syngenta, Dow AgroSciences and DuPont similarly defended their own merger plans at the hearing, saying that combined resources would help spur better innovations. Grassley said that the China National Chemical Corp. declined to testify.

Republican Sens. Thom Tillis of North Carolina and Orrin Hatch of Utah said the companies are facing too many government regulations and that is one reason for the mergers.

"No one this side of the dais should be surprised that they have to go through this to survive," Tillis said.

Democrats were less supportive. "You have to look at it from the consumer's point of view, and whether that is good policy," said Illinois Sen. Dick Durbin.

Farm groups testified that they are worried about the consequences.

Roger Johnson, head of the National Farmers Union, said that the mergers would mean that three companies would have more than 80 percent of U.S. corn seed sales and 70 percent of the global pesticide market.

"These mergers will result in fewer choices for farmers, higher prices, and less innovation," he said.

Monsanto sells seeds for fruits, vegetables, corn, soybeans, cotton and other crops, plus heavily advertised Roundup weed killer. The company is a leading producer of genetically modified seeds engineered to resist drought and herbicides, among other things. Activists who oppose those so-called genetically modified organisms, or GMOs, have created a grassroots effort to vilify the company, even holding marches on city streets to protest Monsanto by name.

Bayer and Monsanto executives so far have not said if the Monsanto name will change. They say the combined company's seeds and North American business will still have a headquarters at Monsanto's St. Louis base.

New Strategies to Save the World's Most Indispensable Grain