New England's leading breweries will compete to see who can turn the questionable water of the Charles River into the tastiest suds. 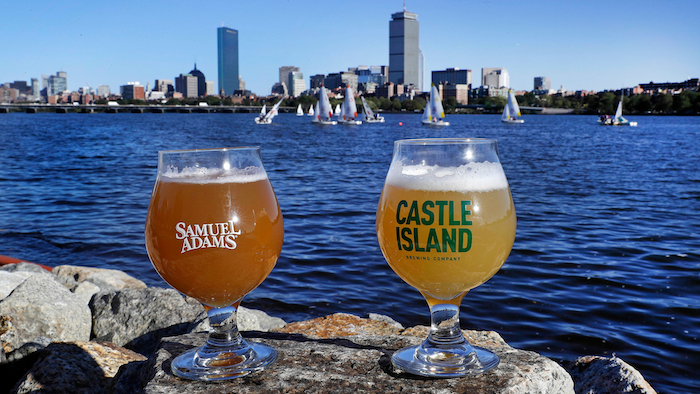 A glass of Samuel Adams Boston Beer Company '80-Miles of Helles' beer, left, and a glass of Castle Island Brewing Company 'Chuck, dry hopped cream ale rest on a rock along the bank of the Charles River. Both beers are made using Charles River water.
AP Photo/Charles Krupa

BOSTON (AP) — Who wants to drink that dirty water? Some of New England's leading breweries will compete to see who can turn the questionable water of Boston's Charles River into the tastiest suds.

Six area breweries have signed on for the first ever "Brew the Charles" challenge, a highlight of HUBweek, a weeklong Boston-area festival celebrating innovation in art, science and technology.

"We're having fun here, but at the end of the day, we want to educate the public and decision makers," he said. "We're all efficient with our energy because we know it has environmental and financial costs. We need to think exactly the same way about water."

The river, which winds through 23 Massachusetts communities before ending in Boston Harbor, has come a long way since it gained notoriety in "Dirty Water," the Standells' 1960s hit and one of Boston's adopted theme songs. Upgrades to wastewater treatment plants over the decades since, now prevent raw sewage from being dumped directly into the river, and environmental regulators have cracked down on improper sewer connections.

The U.S. Environmental Protection Agency gave the Charles a B+ for meeting water quality standards for almost all boating and some swimming in its most recent annual report card. There's even a movement to build a permanent swimming facility in the river. A portion of the proceeds from "Brew the Charles" will go toward that effort.

Jennifer Glanville, the brewer at Sam Adams, said it is brewing a German "helles" lager that she believes will "showcase" the water's unique character. They're calling it "80 Miles of Helles," after the 80-mile length of the Charles River.

Adam Romanow, founder of Castle Island Brewing, said his team went with a dry-hopped cream ale in hopes that it will also "let the water shine through." The Norwood, Massachusetts brewery is calling their concoction "Chuck."

"With this style, there's not much to hide behind," Romanow explained. "It's a traditionally lighter, lower-alcohol, classic American style that has been around for eons but generally gets a bad rep despite being absolutely amazing - kind of like the Charles itself."

Alexandra Ash, a spokeswoman for the Charles River Watershed Association, which has worked for decades to improve the river's health, applauded the spirit of the competition but cautioned that it's still not always safe to swim in the Charles, let alone drink from it untreated.

The association this month found high levels of cyanobacteria, a blue-green algae that can irritate the ears, nose and throat and sicken those who drink or swim in it. "We still have a bit more work to do until that's a possibility," Ash said of drinking river water. "But what's cool about this competition is that it shows off another great aspect of greater Boston — our local water innovation and expertise."

Brewers at Sam Adams and Castle Island Brewing report the Desalitech-treated water was high quality. They used it as they would have any other water source — no additional steps or special treatments needed.

"We've had tons of people ask us if it's safe to drink, if it will make them glow and so on," Romanow said. "But I enjoyed one and I'm not glowing. So I think it's safe to say that not only can you drink this beer, but you're going to want to."