Offshore Wind Sails Forward, but a Different Story on Land

People who like the idea of wind energy in the abstract rarely want it near their own backyards, according to a 2014 study. 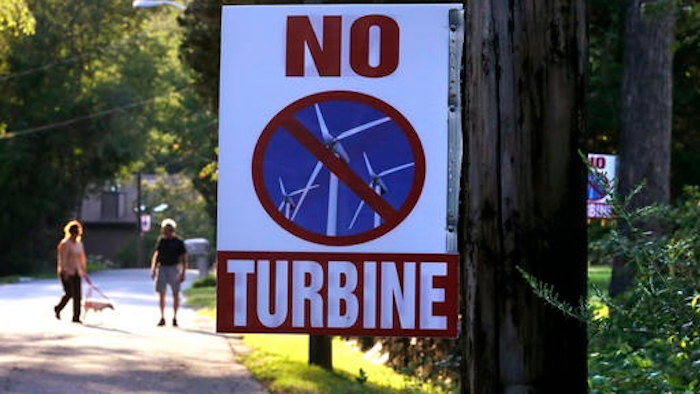 In this Thursday, Aug. 25, 2016 photo, a sign against a proposed wind turbine hangs from a neighborhood telephone pole, in North Smithfield, R.I. Even as Rhode Island makes history as the first U.S. state with an offshore wind farm, its people are not so fond of wind turbines sprouting up on land near where they live. Town leaders in North Smithfield are proposing a ban on any new wind turbines in the rural community near the Massachusetts border.
AP Photo/Charles Krupa

NORTH SMITHFIELD, R.I. (AP) — Even as Rhode Island makes history as the first U.S. state with an offshore wind farm, its people are not so fond of wind turbines sprouting up on land near where they live.

Dreams of a wind-powered nation sparked by the pioneering Atlantic Ocean project are running aground back on shore, where conventional battles over aesthetics and property values have stymied wind projects here and around the country.

Ruth Pacheco said she didn't expect so much hostility when she invited a developer to build a giant wind turbine atop a forested hill at her 52-acre family farm in rural North Smithfield.

The 86-year-old proprietor of the Hi-on-a-Hill Herb Farm believes harvesting wind energy is the best way to preserve the land her family has owned and cultivated since the 1840s. But she wasn't prepared for the dozens of "No Turbine" signs, erected outside nearly every home on the road leading up to her farm.

"We've lived here all our lives and seen people come and go," Pacheco said. "I guess you just can't take it personally. They've got tunnel vision out there."

Responding to the ire of Pacheco's neighbors, North Smithfield leaders are now drafting a town-wide ban on wind turbines, though it is too late to affect Pacheco's project because it already has a permit.

Compared with the five-turbine, 30-megawatt offshore wind farm recently completed in blustery state waters and scheduled to switch on this fall, Rhode Island's 20 land-based wind turbines are more modest generators of energy, with a combined capacity of about 21 megawatts, enough to power more than 6,000 homes, or a small town about the size of North Smithfield.

They're becoming familiar landmarks in the nation's smallest state, visible from major highways and popular beaches, but Rhode Island still ranks near the bottom of the 40 states that produce some wind energy.

U.S. Energy Department records show Texas and California have the most turbines, each with more than 10,000. The two big states vie with smaller windswept Plains states in producing the most wind energy. Iowa, Oklahoma, Illinois, Kansas and Minnesota are the leaders.

Unlike those farm states, Rhode Island is tiny and densely populated. And people who like the idea of wind energy in the abstract rarely want it near their own backyards, according to a 2014 study by researchers at the University of Rhode Island that found that the turbines don't hurt property values.

Pacheco's neighbors said their concerns include noise, maintenance and "shadow flicker," the blinking effect that occurs during parts of the year when the sun rises or sets behind the spinning blades. They are also concerned about the height, which at 415 feet — when the blade is pointing up — would be almost as tall as Rhode Island's tallest building, a 26-story Providence skyscraper.

"To save her farm she's affecting all of her neighbors," said Sharon Mayewski, whose 17-acre lot abuts Pacheco's. Mayewski is president of a new group called COURT, or Conserve Our Unique Rural Town, that was formed to halt the turbine project.

On a recent visit to Pacheco's farm, a wild turkey strolled beneath a mulberry tree as the proprietor and her two daughters showed off the property where they all grew up and still live in three adjacent houses.

Cattle once roamed its pastures, but the farm is now focused on herbs, dried everlastings, chickens, beehives and educational programs. The family has also worked with the government to plant native grasses and wildflowers and tend the property's expansive woodland as part of a decade-long forestry management project.

None of the agricultural harvest can match the $54,000 annually promised by a 25-year lease agreement Pacheco signed with Wind Energy Development, the North Kingstown company that has installed many of the wind turbines in the state.

"It will ensure that the girls can maintain the land for future generations," Pacheco said. "We may not be here, but we hope the footprint will be here for someone to enjoy."

Town Councilwoman Roseanne Nadeau said she sympathizes with Pacheco but opposes wind turbines in the town. The town last year rejected the same developer's proposal for wind turbines on municipal land behind a big-box shopping center, not far from Pacheco's property.

Nadeau, a former real estate appraiser, doesn't believe most of the arguments that neighbors have made against the turbine, from concerns about property values to health worries. Instead, she points to maps that show her town, near the Massachusetts border and far from the ocean, just isn't very windy.

"We don't have the right wind flow," she said. "That's the only reason I'm against it. And also the burden of who is going to take it down."

The turbine developer said it's studied the wind in North Smithfield and is confident there's enough at Pacheco's site to make the project viable. It also insists that most people won't notice the turbine because it's quiet and will be in the woods.

"Once turbines are up, people don't complain about them," said Hannah Morini, a project developer for the company. "It's like anything new. It becomes part of your background after a while."