An investigation found Ireland granted such lavish tax breaks to Apple that the multinational's effective corporate tax rate on its European profits dropped from 1 percent in 2003 to a mere 0.005 percent in 2014. 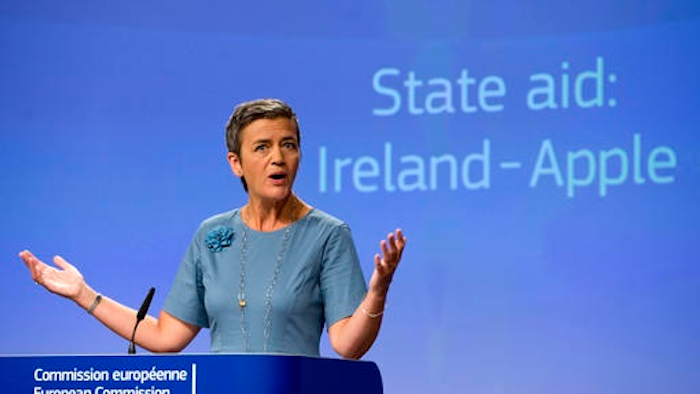 European Union Competition Commissioner Margrethe Vestager speaks during a media conference at EU headquarters in Brussels on Tuesday, Aug. 30, 2016. The European Union says Ireland has given illegal tax benefits to Apple Inc. and must now recover the unpaid back taxes from the U.S. technology company, plus interest.
AP Photo/Virginia Mayo

BRUSSELS (AP) — Apple will have to pay up to 13 billion euros ($14.5 billion) plus interest in back taxes to Ireland after the European Union found Tuesday that the U.S. technology giant received illegal tax benefits over 11 years.

The ruling is the biggest salvo in the EU executive Commission's battle to have multinationals pay their fair share in the region. The EU alleges that many big companies struck deals with EU countries to pay unusually low tax in exchange for basing their EU operations there.

EU Competition Commissioner Margrethe Vestager said that a three-year investigation found Ireland granted such lavish tax breaks to Apple that the multinational's effective corporate tax rate on its European profits dropped from 1 percent in 2003 to a mere 0.005 percent in 2014.

That last tax rate meant that for each million euros in profits, Apple paid just 50 euros in taxes, Vestager told a news conference.

"Ireland must now recover the unpaid taxes in Ireland from Apple for the years 2003 to 2014 of up to 13 billion euros ($14.5 billion), plus interest," the Commission said in a statement.

Apple said in a statement that it had followed the law and paid every cent of the taxes it owed. It said it would challenge the EU action in the European courts, and predicted it would be vindicated.

The Irish government denied granting favorable fiscal treatment to the maker of the iPhone and other consumer electronics products, computer software and online services. "Ireland's position remains that the full amount of tax was paid in this case and no state aid was provided," the Irish statement said. "Ireland does not do deals with taxpayers."

Apple accused the EU executive body of engaging in efforts "to rewrite Apple's history in Europe, ignore Ireland's tax laws and upend the international tax system in the process."

"The Commission's case is not about how much Apple pays in taxes, it's about which government collects the money," the company said in a statement. "It will have a profound and harmful effect on investment and job creation in Europe. Apple follows the law and pays all of the taxes we owe wherever we operate. We will appeal and we are confident the decision will be overturned."

The Irish finance minister, Michael Noonan, said he would seek approval from the Irish Cabinet to legally challenge the EU Commission's ruling.

"It is important that we send a strong message that Ireland remains an attractive and stable location of choice for long-term substantive investment," Noonan said. "Apple has been in Ireland since the 1980s and employs thousands of people in Cork."

A statement from the U.S. government was expected later Tuesday.