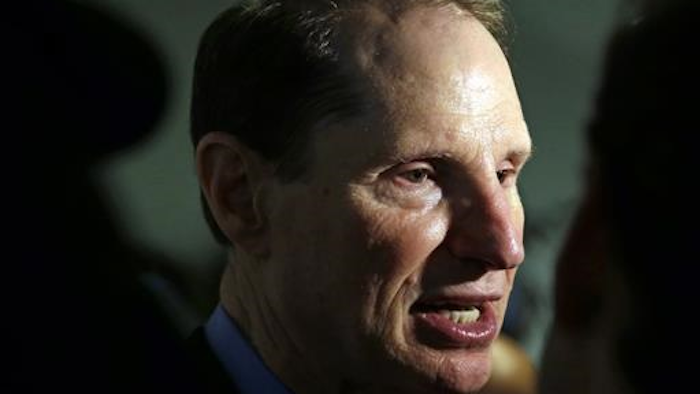 In this Friday, Sept. 25, 2015, file photo, U.S. Sen. Ron Wyden, D-Ore., speaks after a news conference in Portland, Ore. Wyden is pushing for more answers on why doctors and patient advocates with financial ties to the pharmaceutical industry came to serve on a panel that advises the federal government on pain issues.
AP Photo/Don Ryan, File

WASHINGTON (AP) — A high-ranking Senate Democrat is pushing for more answers on why doctors and patient advocates with financial ties to the pharmaceutical industry came to serve on a panel that advises the federal government on pain issues.

Sen. Ron Wyden says he is "even more concerned" about these apparent conflicts of interest after receiving a response from the National Institutes of Health, which vetted and selected the panel members. In a letter sent Thursday to the Obama administration's top health official, Wyden requests a series of documents related to the pain panel, including financial disclosure forms filled out by its members.

A spokesman for the Department of Health and Human Services, which oversees NIH, said in a statement, "we will be reviewing the letter and responding in a timely manner."

The panel attracted attention late last year when several members bashed a federal plan to recommend doctors reduce prescribing of painkillers used to treat chronic pain, such as OxyContin and Percocet. The guidelines were ultimately issued in March by the Centers for Disease Control and Prevention, despite the panel's objections.

The Associated Press reported earlier this year that nearly half of the non-federal members on the panel had apparent ties to pharmaceutical companies or advocacy groups that receive funding from drugmakers. The panel includes federal officials and outside doctors and patient representatives.

"I'm going to continue to demand accountability to ensure the manufacturers of these powerful prescription drugs aren't having an undue influence on policies designed to reduce their usage," said Wyden, who is the highest-ranking Democrat on the Senate Finance Committee, in a statement.

Two panelists work for the Center for Practical Bioethics, a Missouri non-profit which receives funding from drugmakers, including OxyContin-maker Purdue Pharma, which donated $100,000 to the organization in 2013. One panelist holds a chair at the center created by a $1.5 million donation from Purdue. The other has received more than $8,660 in speaking fees, meals, travel accommodations and other payments from pain drugmakers, including Purdue, according to federal records.

In total, the Center for Practical Bioethics says drug and device companies have contributed about 5 percent of its funding in the last four years, though the center does not publish specific donation amounts.

Wyden's ongoing inquiry comes as Congress tries to stem the rise in fatal painkiller overdoses, which rose to an all-time high of nearly 19,000 in 2014, up fourfold since 2000.

"Given the public health epidemic rooted in prescription opioid addiction, current policy governing these powerful drugs merits particularly close scrutiny, and at this time appears to be inadequate," states Wyden, in the letter.

In an April response to Wyden, NIH Director Dr. Francis Collins explained that "all members fully disclosed" their earned income from pharmaceutical manufacturers, as required. He also explained that NIH took great care to make sure the panel "is balanced in terms of the points of view and the functions performed."

But Wyden's letter points out that the two members of the panel who worked for the Center for Practical Bioethics did not recuse themselves from discussion of the CDC guidelines, which could hurt painkiller sales for drugmakers.

"In my view, this is indicative of a flawed conflicts of interest policy," states Wyden.

The Oregon Democrat is asking the Department of Health and Human Services to turn over the standards it uses to choose panelists and explain how each panel member met those standards. He also asks for the nomination forms related to the panel and all instances when the panel received comments from drugmakers. Wyden requests the materials by June 30.