The two plants have lost a combined $800 million since 2009, countering consumer groups' complaints of 'bailout.' 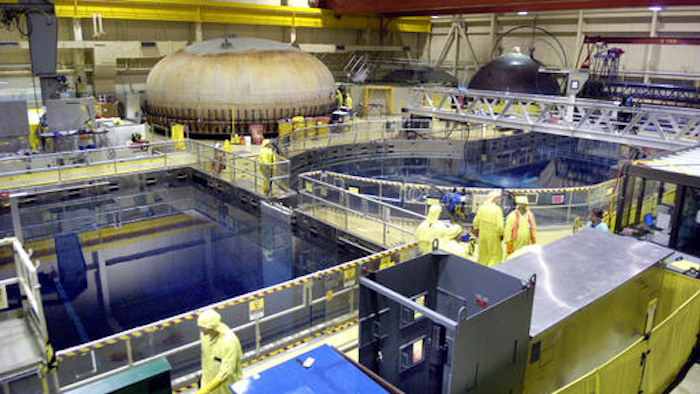 In this May 16, 2006 file photo, employees and contractors work inside Quad Cities Generating Station at the Exelon Nuclear plant in Cordova, Ill. Exelon Corp. says it will shut two Illinois nuclear plants after the Illinois Legislature declined to act on its request for financial support. The Chicago-based power provider said Thursday June 2, 2016 that it will close the Clinton Power Station in Clinton on June 1, 2017, and the Quad Cities Generating Station in Cordova on June 1, 2018.
Antonio Perez/Chicago Tribune via AP

SPRINGFIELD, Ill. (AP) — Exelon Corp. said Thursday that it will shut two Illinois nuclear power plants after the Legislature failed to approve a financial-support plan, but an email obtained by The Associated Press indicates the company is enlisting employees in an ongoing, full-steam lobbying effort.

The Chicago-based power-provider announced it will shutter the Clinton Power Station in central Illinois on June 1, 2017, and the Quad Cities Generating Station in Cordova will close June 1, 2018.

Exelon said it began the lengthy shutdown process because it can't count on legislation that would extend state subsidies to nuclear generators producing reliable, carbon-free electricity that will help Illinois meet federal requirements. Lawmakers adjourned their spring session Tuesday without taking any action on the financial-support plan.

"Unfortunately, legislation was not passed, and now we are forced to retire the plants," Exelon CEO and President Chris Crane said in a statement. Together, the Quad Cities site, which began operation in 1973, and Clinton, which reached full power in fall 1987, employ 1,500.

The two plants have lost a combined $800 million since 2009, according to Exelon, countering consumer groups' complaints of "bailout" with a theme of fairness in a state where wind, solar and other energy sources that don't produce harmful greenhouse gases are rewarded with subsidies.

Earlier Thursday, Crane's email to employees with the news, obtained by the AP, included a plea that workers call a listed telephone line and record a message for Gov. Bruce Rauner and lawmakers in favor of the legislation.

The recorded greeting urges callers to tell lawmakers that "if they take action immediately, they may be able to stop the closures at the Clinton and Quad Cities plants and save your job."

Exelon spokesman Paul Adams confirmed the closure decision is not irreversible, but released a statement saying that it would be possible "only in narrow circumstances, and as weeks pass, a reversal becomes more and more difficult."

Experts disagree on whether shutting the plants would raise the price of electricity. Exelon points to a 2015 state report that found that closing them would pump regional wholesale energy prices up 47 percent. Dave Lundy, director of the BEST Coalition opposing the plan, said price spikes are unlikely because of the amount of electricity produced in Illinois and the high cost to send it through jammed transmission lines in the Quad Cities.

The coalition claims the so-called Next Generation Energy plan would amount to an average $3 per-month rate hike for ratepayers and a $7.7 billion windfall for Exelon over 10 years. Exelon puts the increase to ratepayers at 25 cents a month in exchange for future power stability.

"Unfortunately, a highly profitable company is choosing to close plants because it hasn't received a blank check to impose unfair and unnecessary rate hikes on Illinois consumers," Madigan said in a statement.

But Sen. Donne Trotter, the Chicago Democrat sponsoring the bill, said it's an essential step to ensuring clean, reliable energy long into the future. While the curtain fell on the legislative session before the players could reach agreement, Trotter said progress had been made in recent weeks and he'll continue negotiating.

"Unfortunately there are too many people running around with 'The Simpsons' idea of how nuclear plants run, and that they have no major role in our future," Trotter said. "Experts around the world agree nuclear is a big part. Our greenhouse gases didn't become a problem until they started ratcheting down the nuclear energy."

Exelon's process began with notification to the federal Nuclear Regulatory Commission. The closures must be approved by organizations that operate the Midwestern electric grid to ensure reliability is not jeopardized.