A plan to pump millions in ratepayer dollars into Three Mile Island and other nuclear plants could usher in heated debate. 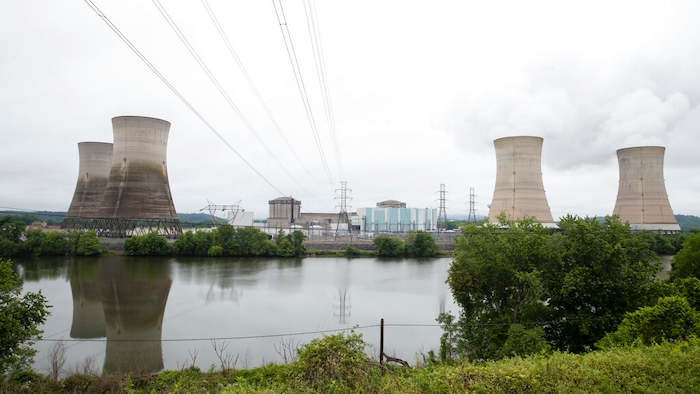 In this May 22, 2017 file photo shown is the Three Mile Island nuclear power plant in Middletown, Pa. With nuclear power plant owners seeking a rescue in Pennsylvania, a number of state lawmakers are signaling that they are willing to help, with conditions. Giving nuclear power plants what opponents call a bailout could mean a politically risky vote to hike electric bills.
AP Photo/Matt Rourke, File

HARRISBURG, Pa. (AP) — Legislation designed to pump hundreds of millions of ratepayer dollars into Three Mile Island and Pennsylvania's other nuclear power plants is being introduced Monday and could usher in heated debate over whether the plants deserve what critics call a bailout.

The debate in Pennsylvania's Capitol will run up against a June 1 deadline. That's when Three Mile Island's owner, Chicago-based Exelon Corp., has said it will begin the monthslong process of shutting down the financially struggling plant that was the site of a terrifying partial meltdown in 1979.

The bill's sponsor, Rep. Thomas Mehaffie, R-Dauphin, said the plan is projected to cost ratepayers around $500 million a year by requiring that nuclear power get preferential treatment like what solar power and wind power received under a 2004 state law.

Under the bill, regulated utilities would bill electricity customers for the cost of buying nuclear power at a similar premium.

Mehaffie estimated the cost to the average household at $1.77 a month, but said that cost pales in comparison to the multibillion-dollar hit to Pennsylvania's economy if the state's five nuclear power plants shut down.

In total, Pennsylvania customers paid more than $14 billion for electricity in 2018, including distribution charges and taxes, according to federal data.

Opponents are lining up and include anti-nuclear activists, AARP, large industrial electricity buyers and the state's considerable natural gas industry. They say that most of Pennsylvania's nuclear power plants are profitable and that Pennsylvania's competitive electricity market has kept power prices low for consumers.

They support Mehaffie's bill, elements of which emerged publicly last month, and are fresh off winning subsidies in New Jersey, New York and Illinois.

Nuclear power plant owners say their revenue is being shredded, primarily by a flood of cheap natural gas plants entering competitive electricity markets. But they say their plants' nuclear energy is a carbon-free source of electricity, like wind turbines and solar panels, and should receive similar value in the fight against global warming.

Opponents question the notion that all of Pennsylvania's nuclear power plants could shut down prematurely.

The companies release little power plant-specific financial information, but Three Mile Island is widely viewed as unprofitable and at a disadvantage because it has just one generating unit after the second one partially melted down in 1979.

FirstEnergy projects that its Beaver Valley nuclear power plant in western Pennsylvania will become unprofitable in 2021 and has said it will shut it down by then, unless Pennsylvania approves a financial rescue.

Independent analysts do not predict much effect, if any, on ratepayer bills if Three Mile Island and Beaver Valley shut down.

Analysts project the other three plants — Limerick, Peachbottom and Susquehanna — will be profitable for the foreseeable future.

Three Mile Island to Shut Down