Company Charged, Could Face Over $2M in Fines

Plains All American Pipeline and one of its employees face 46 counts of state law violations. The 140,000-gallon spill closed beaches and killed sea lions and birds. 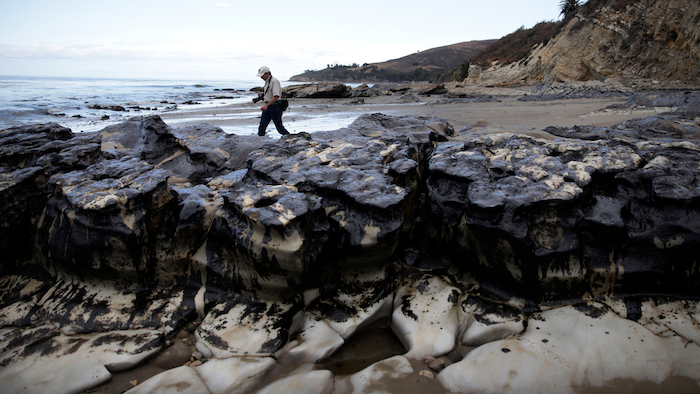 LOS ANGELES (AP) — A Texas pipeline company that spilled more than 140,000 gallons of crude oil on the California coast last year was indicted on dozens of criminal charges in the disaster that closed popular beaches and killed sea lions and birds.

Plains All American Pipeline and one of its employees face 46 counts of state law violations in the May 19, 2015, spill that initially went undetected when a severely corroded two-foot-wide pipe ruptured and oil began pouring onto a pristine beach on the Santa Barbara coastline and flowing out to sea.

Plains was charged in Santa Barbara Superior Court with four felony counts of spilling oil in state waters and could face fines of up to $2.8 million if convicted of all the charges, prosecutors said.

"The carelessness of Plains All American harmed hundreds of species and marine life off Refugio Beach," California Attorney General Kamala Harris said in a statement. "This conduct is criminal, and today's charges serve as a powerful reminder of the consequences that flow from jeopardizing the well-being of our ecosystems and public health."

The spill two weeks before Memorial Day weekend last year forced the state to close popular beaches as an oil plume spread nine miles into the Pacific Ocean. Tar balls from the oil washed up more than 100 miles away on Los Angeles County beaches and more than 220 birds, such as pelicans, and nearly 140 marine mammals, mostly sea lions, were found dead in the aftermath.

The Houston-based company faces three dozen misdemeanor counts of harming wildlife. Plains said in a statement that the spill was an accident and believes no criminal behavior occurred.

"We will demonstrate that the charges have no merit and represent an inappropriate attempt to criminalize an unfortunate accident," the company said.

The spill was a grim reminder of a much larger disaster in 1969 when an offshore oil rig blowout blackened Santa Barbara beaches, killed wildlife and created a backlash that helped give birth to the environmental movement.

The Plains rupture was the largest coastal oil spill in the U.S. since the BP's Deepwater Horizon explosion in the Gulf of Mexico six years ago. Plains could still face federal criminal charges for last year's spill. The Department of Transportation's pipeline enforcement agency is expected to release results this spring of its year-long investigation into the disaster's cause and could issue fines.

Initial investigation results have pointed to a badly corroded pipeline that had undergone strength tests just weeks before the spill, but the results had not been analyzed before it broke. Preliminary reports also show it took hours for Plains to recognize what happened before notifying officials.

A Plains employee and the company were charged in the indictment with misdemeanor counts of failing to report the spill quickly enough to state emergency officials. James Buchanan, 41, the company's environmental and regulatory compliance specialist, faces up to three years if convicted of three counts, prosecutors said.

The company and Buchanan are scheduled for arraignment June 2. Plains said it had cooperated fully in the investigation, but Harris said at a news conference the company had been "far less than cooperative."

The charges were welcomed by environmental groups, who said it would hold the company accountable and send a strong message to other companies in the petroleum industry to eliminate the risk of spills.

Many local residents didn't think Plains took the spill seriously even as a representative apologized at regular press conferences and the company sent postcards across the county to apologize "for the inconvenience," said Linda Krop, chief counsel for the Environmental Defense Center.

"That really insulted everybody," Krop said. "It showed that they did not understand the magnitude of this and that they weren't taking responsibility the way they should."

The pipeline remains shutdown while the company makes repairs and federal regulators other actions necessary. In the meantime, seven offshore platforms, including three owned by Exxon Mobil, are idle because the pipeline delivered crude they produced to refineries.

The spill is expected to cost the company $269 million, not counting lost revenue, according to the company's annual report.

Multiple class-action lawsuits from landowners, fishermen and business owners who say the spill crippled a thriving tourism industry are still pending. Some investors have filed suit alleging they were misled about the integrity of company pipelines.