Some argue that allowing military contracts with sneaker manufacturers takes away what little choice military servicepeople have when it comes to their daily gear.

You know that old expression “if the shoe fits, wear it?” Well, if you’re the U.S. military, it’s more like – “if the shoe fits and meets certain cost and durability standards, and is made exclusively in the United States, then wear it. Maybe.”

The Stepping Up for American Workers and Troops Act was developed to address the one apparel item that the military has been, up til now, unable or unwilling to buy from an American manufacturer. The 1941 Berry Amendment requires the military to buy American-made equipment and uniforms but sneakers have long been exempt, because it was hard to find suitable models made entirely in the United States.

New Balance, the Bean Town-based athletic shoe company, as well as fellow U.S. based shoe purveyor Saucony, both say they have sneakers ready for military recruits to wear now, which would allow the military to comply with existing statute while also supporting the American economy. And the House and Senate versions of the fiscal 2017 National Defense Authorization Act include provisions permitting contracts between qualified sneaker manufacturers and the Defense Department.

But some parties aren’t exactly rallying behind the bill’s language. U.S. Rep. Mark Sanford of South Carolina, along with the conservative advocacy group Heritage Action for America, say allowing military contracts with sneaker manufacturers takes away what little choice military servicepeople have when it comes to their daily gear. Sanford has proposed an amendment to remove language greenlighting military sneaker contracts, according to South Carolina’s Post & Courier, and this week legislators will debate its merit.

Meanwhile, New Balance and Saucony say they have no desire to have a monopoly on a Pentagon contract. In fact, the two companies are competitors, and essentially teamed up to help keep this legislation moving forward. Both companies say that no matter which gains the contract – if there’s a contract to be had – South Carolina benefits. Spartanburg is home to two textile manufacturers that provide materials to both companies.

‘Performance’ Shoe is for Gaming 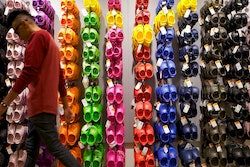