More Charges Coming in Flint; 'No One Off the Table'

The first charges come out of a disaster blamed on a series of bad decisions by bureaucrats and political leaders. 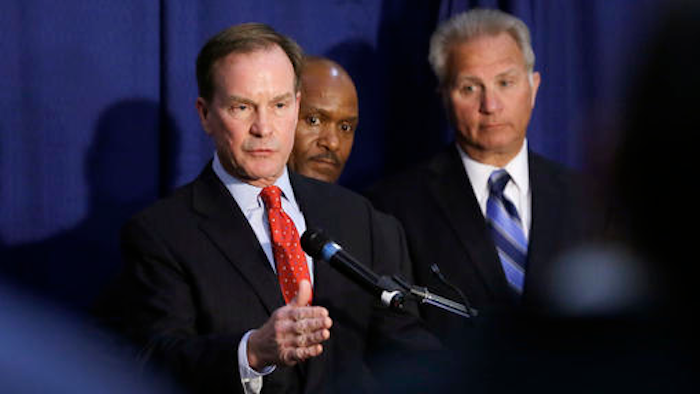 Michigan Attorney General Bill Schuette addresses the media, Wednesday, April 20, 2016, in Flint, Mich. Months after officials conceded that a series of bad decisions had caused a disaster, charges were filed against a pair of state Department of Environmental Quality employees and a local water treatment supervisor and stem from an investigation by the office of the attorney general.
AP Photo/Carlos Osorio

FLINT, Mich. (AP) — The Flint water crisis has become a criminal case, with two state regulators and a city employee charged with official misconduct, evidence-tampering and other offenses over the lead contamination that alarmed the country and brought cries of racism.

For nearly 18 months, the poor, majority-black city of 100,000 used the Flint River for tap water as a way to save money — a decision made by a state-appointed emergency manager — while a new pipeline was under construction. But the water wasn't treated to control corrosion. The result: Lead was released from aging pipes and fixtures as water flowed into homes and businesses.

"This is a road back to restoring faith and confidence in all Michigan families in their government," state Attorney General Bill Schuette said Wednesday in announcing the first charges to come out of the disaster, blamed on a series of bad decisions by bureaucrats and political leaders.

He warned there will be more charges — "That I can guarantee" — and added: "No one is off the table."

Gov. Rick Snyder didn't acknowledge the problem until last fall, when tests revealed high levels of lead in children, in whom the heavy metal can cause low IQs and behavioral problems.

Michael Prysby, a former district engineer with the state Department of Environmental Quality, and Stephen Busch, a supervisor in the department's drinking water office, were charged with misconduct, conspiracy, tampering with test results and misdemeanor violations of clean-water law. The felonies carry maximum penalties of four to five years in prison.

Among other things, they were accused of failing to order anticorrosion chemicals added to the water to coat the pipes and prevent them from releasing lead.

Flint utilities administrator Michael Glasgow, who oversaw day-to-day operations at the city's water plant at the time, also was charged Wednesday with tampering with evidence for allegedly falsifying test results and with willful neglect of duty.

Busch and Prysby pleaded not guilty and were released on bail. Both were suspended without pay. Their attorneys did not immediately return calls seeking comment.

Glasgow was also placed on leave and awaited a court appearance. A telephone number for him could not be found, and it wasn't known whether he had a lawyer.

The crisis — and the state's slow and dismissive response to complaints about the water from experts and residents — led to allegations of environmental racism, became an issue in the presidential race during Michigan's Democratic primary in March, and sent other U.S. cities rushing to test their water, particularly in older neighborhoods with lead pipes.

"They failed Michigan families. Indeed, they failed us all," Schuette said of the men charged. "I don't care where you live."

Essentially, all three were accused of failing to do their duty to provide safe drinking water.

"This is rare," said Neil Rockind, a Detroit-area defense attorney and former prosecutor. "It's very hard to find a similar case where people are charged for just being personally bad or neglectful at their job. Usually there's some personal corrupt intent involved."

He said outrage over the Flint water mess has created a mood "where someone has to pay."

For months, people in Flint have been relying on filters and bottled water. Some still do not trust what comes out of their faucets, even though the city rejoined the Detroit-area water system last fall and anticorrosive phosphates are being added.

The governor filled a few jugs of filtered Flint tap water this week and pledged to drink it for 30 days to show it's safe.

"It's a good first step, but it's a small step," Flint resident Melissa Mays said of the criminal charges. "These are lower-level people, and I want to know who was instructing them to do what they did. I think it's important that we can see some form of accountability being laid out, but at the end of the day we still can't drink or bathe in our water safely."

Outside experts have also suggested a link between the river and a deadly Legionnaires' disease outbreak. During a 17-month period, there were at least 91 cases, including 12 deaths, across Genesee County, which includes Flint. That's a fivefold increase over what the county averaged before.

After the crisis broke open, DEQ Director Dan Wyant and his spokesman resigned. The chief of the department's drinking water office was fired. And the director of the U.S. Environmental Protection Agency's Chicago-based Midwest office stepped down.

The Flint debacle exposed a problem that extends well beyond the one-time industrial powerhouse.

An Associated Press analysis of EPA data found that nearly 1,400 water systems serving 3.6 million Americans exceeded the federal lead standard at least once between the start of 2013 and last September.

Most U.S. cities stopped installing lead pipes in the 1930s to carry water from main lines under the streets and into homes. But a survey by the American Water Works Association found that 6.5 million of these pipes are still in use.

Some researchers question whether chemical treatment and routine testing for lead in the water are enough, arguing that the only way to remove the threat is to replace the plumbing. The cost, though, could be huge.

Michigan lawmakers are considering legislation to give Flint an emergency $25 million to replace thousands of lead pipes. 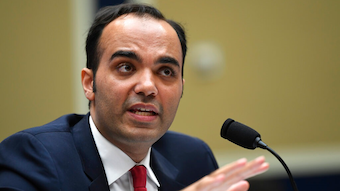