Indian official says private cars will be allowed on the streets on alternate days based on even or odd license plate numbers. 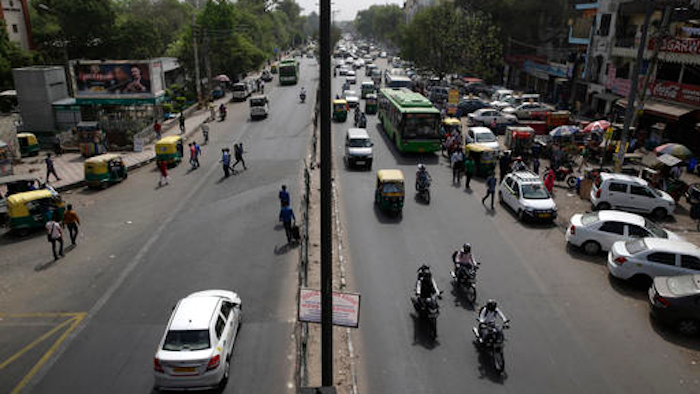 Few vehicles are seen plying on the otherwise severely busy Mehrauli Badarpur road during rush hour in New Delhi, India, Friday, April 15, 2016. The New Delhi government has begun a second round of a two-week car restriction whereby private cars will be allowed on the streets on alternate days from Friday until April 30 based on even or odd license plate numbers, to reduce air pollution that has made the Indian capital the world's most polluted city.
AP Photo/Saurabh Das

NEW DELHI (AP) — The New Delhi government on Friday began a second round of two-week car restrictions to reduce air pollution that has made the Indian capital the world's most polluted city.

The city's top elected official Arvind Kejriwal said private cars will be allowed on the streets on alternate days from Friday until April 30 based on even or odd license plate numbers.

Friday was a holiday in India and traffic was a trickle compared to the usual gridlock that swamps the roads in the capital every day. Schools, colleges and government offices were shut.

Traffic police and inspectors will be helped by more than 5,000 civil defense volunteers to enforce the two-week rule. Violators will be fined $30.

Over 700 people were fined in the first few hours after the restriction went into effect at 8 a.m., police said. The restrictions will be in place from 8 a.m. to 8 p.m. from Monday to Saturday.

Residents said the impact of the traffic limitations would be evident only on Monday when people return to work.

Similar restrictions in January had led to a significant reduction in pollution levels after more than one-third of the city's 3 million private cars went off the roads.

Many vehicles, especially trucks, run on highly polluting diesel. The air quality worsens during the winter months, when the combination of ash from crop waste burned in nearby farming areas, construction dust and the still wintry air all contribute to make it difficult to breathe. Air pollution contributes to more than 600,000 deaths each year in India.

On Friday, while the skies were clear, fewer vehicles on the road meant traffic moved smoothly across the city.

Emergency and police vehicles, ambulances, taxis, women drivers and motorcycles are exempt. The Delhi government had last year ordered all taxis to convert their engines to compressed natural gas by March 31 this year. That date has been extended by a couple more weeks, officials said.

Sunil Dahiya of the environment group Greenpeace India said that more than the benefits from the decline in air pollution levels, the government's decision to limit the number of cars on the roads had increased public awareness about the problem.

The Delhi government has ordered a slew of other measures to lower the city's pollution levels, including shutting down some coal-fired power plants in the vicinity of the city and a temporary ban on the sale of large diesel vehicles. New tolls have been introduced for pollution-spewing trucks entering the capital.

However, some residents felt the two-week measure was too short to clear Delhi's heavily polluted air.

"If you really want to bring down the pollution index, the restrictions have to be in effect for at least for six months, or a year," said Vivek Tripathi, who works in a bank.