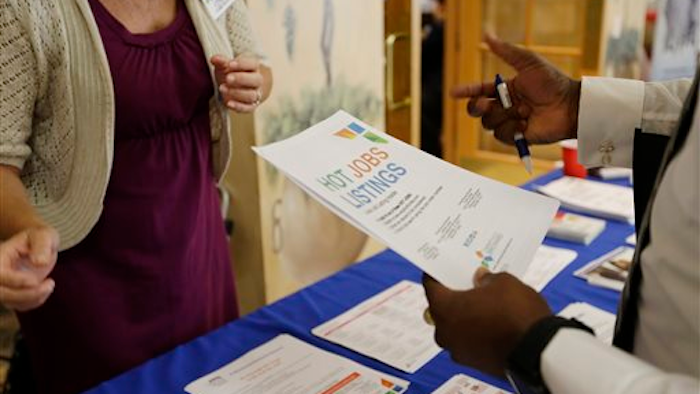 In this Tuesday, Oct. 6, 2015, file photo, a military veteran, at right, talks with a veterans outreach representative about employment opportunities, at a job fair for veterans, in Pembroke Pines, Fla. On Thursday, Feb. 25, 2016, the Labor Department reports on the number of people who applied for unemployment benefits the week before.
AP Photo/Lynne Sladky, File

THE NUMBERS: The Labor Department says weekly applications rose 10,000 to a seasonally adjusted 272,000. The four-week average, a less volatile figure, declined 1,250 to 272,000. The number of people collecting benefits has declined 4.9 percent in the past year to 2.25 million.

THE TAKEAWAY: The figures indicate that weak overseas economies and wild swings in the stock market haven't caused employers to cut jobs. Applications are a proxy for layoffs, and have been at historically low levels for nearly a year. Employers appear confident enough in future growth to hold onto their staffs.

Job gains have been solid for the past three years, pushing the unemployment rate down to an eight-year low of 4.9 percent. Wage gains are accelerating, but still remain below levels consistent with a healthy economy.

KEY DRIVERS: Americans are shopping and eating out at restaurants, helping to offset drags from China's faltering economy and recessions in other developing countries such as Brazil and Russia.

Consumer spending makes up about 70 percent of U.S. economic activity and economists expect it will help bolster US growth this year, even as manufacturing and exports likely remain weak.

Americans are also spending more on big-ticket items such as cars and homes. Sales of existing homes ticked up in January to nearly the healthiest level in nine years.

Economists forecast the U.S. economy will expand about 2.3 percent this year, similar to the modest growth that has occurred during the six-year recovery from the Great Recession.