Engineers Have a Month to Find Flint's Bad Pipes

The goal is to replace 30 service lines by mid-March, a 'very short timeline.' 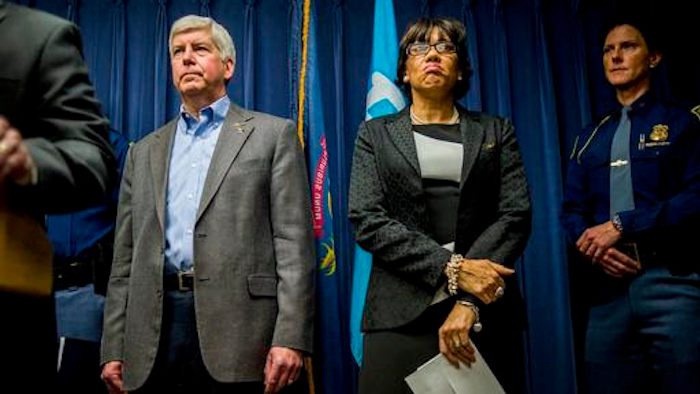 In a Jan. 27, 2016 file photo, Gov. Rick Snyder, left, stands beside Flint Mayor Karen Weaver as they prepare to field questions about the city's water crisis during a press conference in Flint, Mich. Newly hired outside engineers have been given a month to find Flint's underground lead water pipes, Snyder said Wednesday, Feb. 17, saying he wants service line replacements to begin promptly but not so quickly that it causes other problems.
Jake May/The Flint Journal-MLive.com via AP, File

Newly hired outside engineers have been given a month to find Flint's underground lead water pipes, Michigan Gov. Rick Snyder said Wednesday, saying he wants service line replacements to begin promptly but not so quickly that it causes other problems.

The governor, facing pressure from Flint Mayor Karen Weaver and national civil rights leaders for quicker action, said his ultimate goal is to replace the old pipes, but the state-funded study is needed to locate them and prioritize which ones to remove first.

Weaver announced Wednesday that the city intends to begin to replacing pipes next week and called on lawmakers to quickly approve $25 million in spending that Snyder proposed in his budget presentation last week.

"I do have some concerns about how fast you do it," Snyder said during a news conference at Rowe Professional Services, the Flint company retained Tuesday to do the analysis, which will include the replacement of 30 service lines by mid-March. "But we're talking a very short timeline to start having some pipes replaced in the community."

He cited concerns from Virginia Tech professor Marc Edwards, who helped expose the lead problem and is now assisting both the city and state, that partial pipe replacements in Washington, D.C., had actually boosted lead contamination.

The information showing which homes have risky pipes is also difficult to retrieve, stored on tens of thousands of index cards.

In a statement before Snyder's event, Weaver said she would "not accept anything less than full removal of all lead pipes from our water system" and said Snyder should pressure legislators.

"Lansing and Washington need to understand that the first and most critical priority is an emergency public health intervention to start getting rid of these pipes immediately," she said.

Flint stopped using treated water from Detroit and switched to the Flint River in 2014 to save money when the city was under state emergency financial management, an interim measure while a new pipeline to Lake Huron is built. The failure to deploy corrosion controls after the switch is considered a catastrophic mistake that enabled lead to leach from aging pipes and reach some homes.

If consumed, lead can cause developmental delays and learning disabilities. Officials hope anti-corrosion chemicals will recoat the pipes so the water is safe to drink without filters within months.

Snyder said recoating pipes while planning to replace them "are not mutually exclusive."

In January, the Republican governor and the Legislature included $500,000 for the Flint infrastructure study as part of a $28 million aid package for Flint, which also included $3 million that the Flint Utilities Department might use to start service line replacements. Snyder is seeking to direct another $195 million toward the crisis, including $30 million to cover a portion of residents' and businesses' water bills for two years and $25 million to replace service lines.

The House is expected to approve the Senate-passed water bill assistance Thursday after a committee OK'd it Wednesday.

Weaver has asked for $55 million for her lead pipe replacement plan. On Monday, the NAACP threatened a mass protest if Snyder does not present a pipe plan within 30 days, including a timeline and the cost.

Edwards said Wednesday he supports eventually removing the pipes and Weaver has a "good plan to make that happen without adverse consequences." But he added "there is not an urgent reason to get the pipes out of the ground" until the U.S. Environmental Protection Agency finishes its sampling.

"We also now know that Flint's records on lead pipe are wrong, which likely makes this a multi-year project for certain," he told The Associated Press in an email. "Unless someone can figure out a way to identify where the lead pipes in Flint actually are, there is no way to finish this project in one or even two years."