The report didn't identify the metals but said researchers were looking at cadmium, copper, lead, mercury, nickel and zinc. Tests done after the spill also found arsenic and lead. 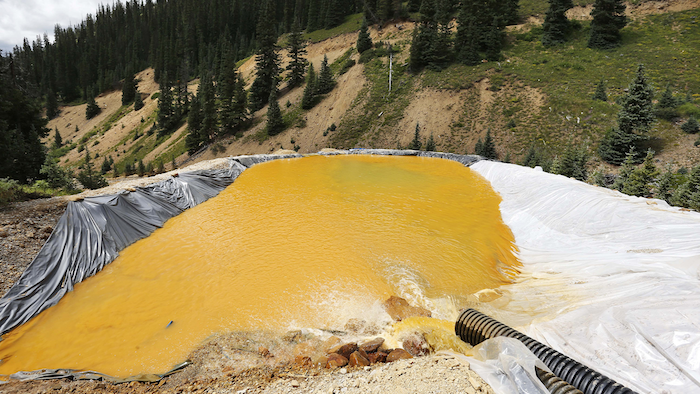 In this August 12, 2015, file photograph, water flows through a series of retention ponds after a spill at the Gold King mine near Silverton, Colorado.
AP Photo/Brennan Linsley, file

(AP) — A 3 million-gallon spill from a southwestern Colorado gold mine last year may have dumped more than 880,000 pounds of metals into the Animas River, the U.S. Environmental Protection Agency said. Some of the metals reached the San Juan River, which the Animas joins in New Mexico, but most settled into the Animas riverbed before that, the EPA said in a preliminary report on the metals.

Utah officials have said some contaminants reached their state, but Friday's report didn't address that. The report didn't identify the metals but said researchers were looking at cadmium, copper, lead, mercury, nickel and zinc. Tests done after the spill also found arsenic and lead in the wastewater.

The EPA said most of the metals consisted of small particles and came from Cement Creek, a tributary that carried the water from the mine to the Animas. Officials have said contaminants in the rivers returned to pre-spill levels shortly after the incident.

An EPA-led cleanup crew inadvertently triggered the spill on August 5 while doing preliminary cleanup work at the inactive Gold King Mine near Silverton, Colorado. The spill provoked a storm of criticism from Congress, especially from majority Republicans, who have also accused the agency of trying to impose unreasonable controls on water and air pollution.

The mountains north of Silverton are pocked with dozens of idle mines like the Gold King, which release a steady flow of tainted wastewater every day. The report released Friday said the amount of metals carried downstream by the Gold King spill is similar to the quantity released into that part of the Animas during one day of high runoff from melting snow in the springtime.

The report said the researchers found "hot spots" of metals in the Animas and San Juan that weren't related to the Gold King spill and said they might warrant further study. The EPA installed a temporary water treatment plant last fall to remove metals from the water still flowing out of the Gold King. The agency is weighing long-term cleanup plans.

The EPA has previously sought to declare the area north of Silverton a Superfund site, which would release millions of dollars in federal money for a cleanup. Residents in and around the scenic village resisted because — among other things — they feared it could discourage tourism, a mainstay of the local economy. Residents and officials are reconsidering and have been negotiating with the EPA over the scale and terms of a cleanup. They haven't yet made a formal request for a Superfund designation.

The EPA says it won't consider the site for Superfund status without the support of state and local officials.