The EPA said it is making progress on reviewing about 380 claims for lost income, fallen property values and other losses from the 2015 spill in Colorado. 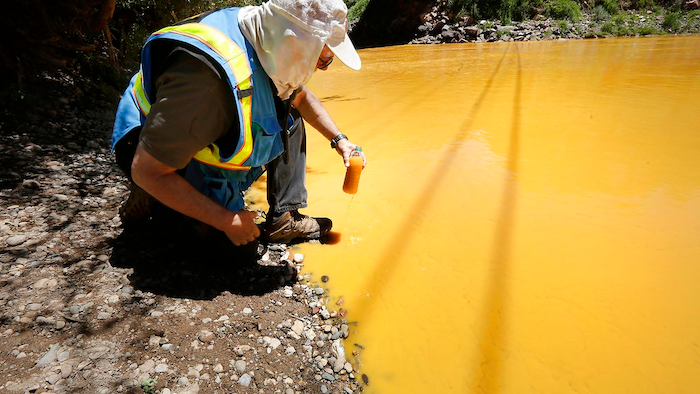 In this Aug. 6, 2015, file photo, Dan Bender of the La Plata County Sheriff's Office takes a water sample from the Animas River near Durango, Colo., after the U.S. Environmental Protection Agency accidentally triggered a spill of 3 million gallons of wastewater from the mine. The Obama administration said it could not legally repay any of the claims for damage from the spill, but the Trump administration promised last year to reconsider. As of Friday, Aug. 3, 2018, no claims had been paid, but the agency said it is continuing to review them.
Jerry McBride /The Durango Herald via AP, File

DENVER (AP) — Three years after the U.S. Environmental Protection Agency triggered a massive mine spill that polluted rivers in three states, the federal government still has not repaid any of the victims for the millions of dollars in economic damage they claimed.

The EPA said this week it is making progress on reviewing about 380 claims for lost income, fallen property values and other losses from the 2015 spill at the Gold King Mine in southwestern Colorado.

But the agency has not said when it might finish the review or when anyone might be paid.

Some business owners say they feel misled and doubt they'll ever be compensated. Lawmakers are impatient.

An EPA-led contractor crew was doing excavation work at the entrance to the Gold King near Silverton, Colorado, on Aug. 5, 2015, when workers inadvertently unleashed 3 million gallons (11.4 million liters) of wastewater pent up inside the mine.

The water sent a yellow-orange plume of pollution into rivers in Colorado, New Mexico and Utah. The Navajo Nation and other tribal lands were also affected. The EPA estimated the water carried nearly 540 U.S. tons (490 metric tons) of metals, mostly iron and aluminum.

Farmers, rafting companies, fishing guides, homeowners and others filed for about $318 million in economic losses, according to EPA documents reviewed by The Associated Press. State, tribal and local governments said their losses were higher.

"We weren't asking for the sky. We were asking for what we lost," said John Flick, co-owner of Duranglers, a fishing guide service and store in Durango, Colorado, about 50 miles downstream from Silverton.

Flick and his partner, Tom Knopick, filed a claim for about $98,000 in lost income from guiding and retail sales when authorities put the rivers off-limits for several days.

"Even if we'd got half of that, we'd have been happy. We got nothing," Flick said.

The EPA paid out millions of dollars to state, tribal and local governments for the cost of responding to the spill and for water tests. But the Obama administration, which was in charge at the time of the spill, said in January 2017 it could not pay for any economic damages. The administration cited sovereign immunity, which prohibits most lawsuits against the government.

That provoked a furious political backlash, and the new Trump administration said it would reconsider. One year ago, then-EPA chief Scott Pruitt visited the Gold King mine and promised to review all the claims.

"As far as I can tell, that was just talk," said Alex Mickel, co-owner of Mild to Wild Rafting, which offers float trips and four-wheel-drive tours in Durango and in Moab, Utah.

Mickel filed a claim but declined say how much. He said the EPA has never acknowledged getting it.

He said he feels misled by both the Obama and Trump administrations. Under Obama, the EPA promised to compensate for the damage.

" 'We're going to make people whole,' that was their words," Mickel said.

Pruitt resigned amid a storm of ethics scandals in July, and the EPA is regrouping under acting chief Andrew Wheeler. But the review is making headway, agency spokesman James Hewitt said.

The EPA sent letters in June to 54 people who filed claims, or to their attorneys, asking for clarification or more information, Hewitt said in an email to the AP Thursday. Only a few have responded, he said.

John Swartout, a policy adviser to Colorado Gov. John Hickenlooper, said he has been brief by the EPA on the review and believes the agency is making progress, but "it's slow going."

The compensation requests were submitted under the Federal Tort Claims Act, which allows people and businesses to ask the federal government to repay them for economic losses and injuries caused by negligence or wrongful action by federal employees.

Separate from the tort claims, at least four lawsuits have been filed against the EPA over the spill. Utah is seeking $1.9 billion, the Navajo Nation $162 million and the state of New Mexico $130 million. About a dozen New Mexico residents also sued, seeking a combined $120 million.

The lawsuits are pending in federal court in Albuquerque, New Mexico.

Costs of Mine Spill May Be Lower

Mine Spill Dumped 440 Tons of Metal