He is effectively rescuing the company 'from collapse.'

It’s been no secret that iconic carmaker Aston Martin has been struggling. After posting a $118 million loss in the first three quarters of 2019, the company warned its year-end profits would be down by half, but the automaker announced Friday that it has a guardian angel.

His consortium will add millions more by investing in a new issue of shares, effectively rescuing the company “from collapse.”

The industry had high hopes for Aston Martin’s first-ever SUV, the DBX, which has also yielded healthy orders.

Some of the proceeds from the investment will help the carmaker ramp up DBX production. Shares in London jumped 30 percent on the news, but have a long way to go.

Aston Martin has lost nearly $4 billion in value since its Oct, 2018 IPO. 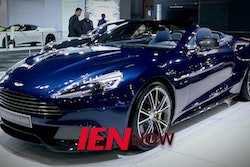