As you can see from his work, it seems to fit a specific niche.

Hobbymax is a toy figure manufacturing company based out of China. The company was started by popular figure designer Kiking, who founded Hobbymax in 2015 with a focus on the design, development and manufacture of models primarily based on characters from anime movies, TV shows, and games.

As you can see from his work, Kiking seems to fit a specific fanboy niche with exquisite attention to detail.

Kiking’s collectables are more works of art than an action figure that a kid is going to smash into truck during a bank heist gone awry. Before any model goes into production, it must first go through the prototype and development phases. In the past, the models were handmade and the process was labor intensive.

Designers shaped each figure out of clay, which were then made into steel molds for mass production. Using clay took months of development, the detail still wasn't there with the molds, and it took some time whenever a particular part was proportionately accurate and the designers needed to add a little material back to the model.

Tier-1 toy companies have been using 3D printers for prototyping for at least a decade, so, in 2016, Kiking looked into the Vector and Perfactory series 3D printers from EnvisionTEC. He purchased a pair of printers to bring into the studio, which the hopes of gaining a competitive edge.

The printers use DLP (or digital light processing) technology, which creates parts by exposing a vat of photopolymer or resin to a light source to cure the material. Some say that the process is an improvement to stereolithography if only because the surface finish in a DLP part doesn't require the same level of surface finishing as an SLA part.

The team at Hobbymax models the designs using software, such as Maya, 3DMAX and Zbrush, before printing prototypes. According to Kiking, the printers have cut nearly a third of the time out of the process, opening them up to launching new, increasingly intricate designs. 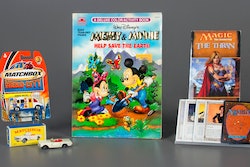