He had some harsh words for the electric vehicle manufacturer.

The past two years have been tough on Volkswagen, though many will argue it was self-inflicted. Early this year the company was at the center of an emissions scandal that will cost the auto manufacturer billions of dollars, as well as seemingly irreparable damage to the brand.

During the same period, the world fell in love with Elon Musk and his electric vehicle manufacturing startup, Tesla. Recently, the company has been forced to deal with its own bad publicity after reports surfaced of workers assembling cars by hand, as well as news that thousands of workers were fired in what the company is calling a performance-review associated culling.

Last week, Volkswagen CEO Mattias Müller appeared on a panel on a German talk show. According to a report from the Daily Kanban, via Business Insider, the panel's moderator stated that Tesla "fascinates customers with its electric cars." Müller used the opportunity to not only attack Musk, but the deficiencies of his California-based EV operation.

According to the report, Müller said that the public shouldn't get carried away with comparisons, VW to Tesla is an apples to oranges comparison. He said, "There are companies that barely sell 80,000 cars a year. Then there are companies like Volkswagen that sell 11 million cars this year."

He said that Tesla "destroys millions of dollars" each quarter, and "willy-nilly fires its workers," but let's not get carried away with comparisons. 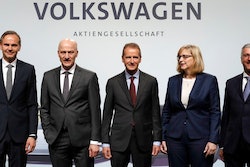 Is VW the Pickup for Women?