Porsche’s All-Electric Sports Car Out By 2019

Two years ago, Porsche turned heads at the 2015 Frankfurt International Motor Show when it introduced the Mission E, an all-electric sports car concept that looked like it was inspired by Tesla's Roadster.

While Tesla has turned its attention to mass appeal with electric sedans and SUVs, Porsche told CAR Magazine that its first all-electric, four-door sports car will be on sale by the end of 2019, and it will be the first of several e-Porsches yet to come.

According to company chairman Oliver Blume, the Mission E will be "priced like entry-level Panamera," which starts at $85,000. He says that prototypes are on schedule and will soon begin public testing.

Production for the Mission E could create more than 1,000 new jobs at Porsche's manufacturing facilities in Germany. According to CAR, the company has invested the equivalent of more than $836 million in the site, including a new assembly plant and a larger engine factory.

As with all EVs, charge time is crucial, and Porsche claims to be able to receive an 80% charge in 15 minutes, which should be enough to cover 250 miles - a full battery will take you 300 miles. 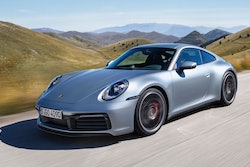 EVs Are Pumping in Fake Noise