Luxury Electrics Are Pumping Fake Engine Noise into the Cabin

Apparently drivers are comfortable being lied to.

About ten years back, the NHTSA (National Highway Traffic Safety Association) confirmed that not only were hybrid and electric vehicles a great way to save on gas, they were also a great way to accidentally hit a pedestrian.

You see, what was initially touted as a benefit – that these battery-powered vehicles were so quiet – was suddenly a liability, as NHTSA said that, at speeds lower than 35 miles per hour, hybrids and electrics were “37 percent more likely to hit walkers and 66 percent more likely to hit a bicyclist” because nobody could hear them coming. This led to an eventual mandate that automakers add some noise to the equation, a directive that asked them to comply by 2019 with the best fake engine noise they muster.

But it sounds like carmakers are already fairly adept at creating fake car sounds because some of them have been pumping fake car noise into their electric vehicle cabins.

It seems some drivers find the lack of noise off putting, while other simply miss the more classic drivetrain. So automakers like BMW and Jaguar have been having fun manipulating the “exhaust note” so the pitch and volume shifts with the throttle.

The intention is, likely, to make the driver experience the grittiness of a powerful engine but instead – according to Jalopnik – the new Jaguar I-Pace sounds more like that noise Jim Carrey makes in Dumb and Dumber that he calls the most annoying sound in the world.

What’s worse, Porsche, who just announced an electric sedan in the works to rival Tesla, says their Taycan model will artificially amplify some sounds so they’re heard more prominently in the cabin – namely the lower register whirring and howling, and muffle the higher pitch whining, so you can better enjoy the pleasant, made-up noise as you fly down the highway pretending you have an engine of yesteryear. 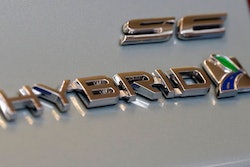