A connected world means paying for gas with your voice and sensing when a plant needs water. 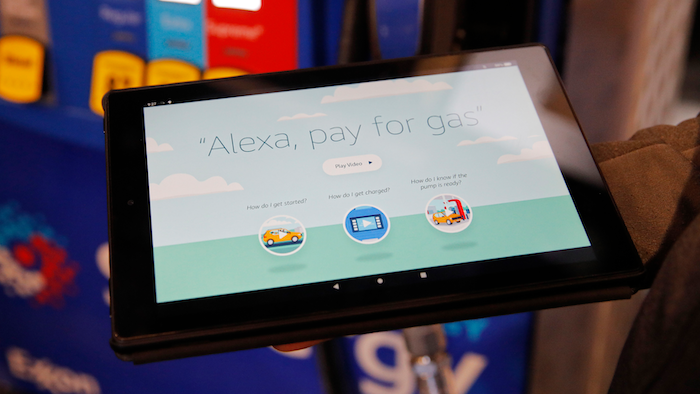 An employee holds a tablet showing a video demonstrating the Alexa pay for gas feature in the Amazon booth at the CES tech show, Wednesday, Jan. 8, 2020, in Las Vegas.
AP Photo/John Locher

LAS VEGAS (AP) — The annual CES technology conference in Las Vegas runs through Friday and offers a forum for big companies and startups to unveil their products and services for the coming year.

Here are some highlights from the show:

Alexa at the Pump

If swiping a credit card is too much of a chore, you’ll soon be able to pay for gas by voice.

Later this year, those who have Amazon’s voice assistant Alexa in their cars will be able to drive into Exxon and Mobil stations and say, “Alexa, pay for gas.” Alexa will then ask you to confirm what station you're at and which pump you're using. The card on your Amazon account card will get charged.

Sorry, but Alexa won't pump gas for you. You’ll need to get out of the car for that.

The new feature is part of Amazon’s push to get into more cars. At CES, the online shopping giant announced several deals with automakers, including bringing Alexa to Lamborghinis and its Fire TV streaming service to BMWs.

Amazon says the gas station feature will be available at 11,500 U.S. locations.

Not all of us can tell when a plant needs more water, less light or perhaps is too warm.

For that, Luxembourg startup Mu Design has created the Lua smart plant pot to give greenery an animated face. Emotions, such as thirsty, sick or cold, are displayed on a digital screen.

“It transforms the needs of the plant into emotion that you can easily understand,” said Vivien Muller from Mu Design. “So you won't be able to kill your plants. You just have to look at it and you'll know exactly what it needs.”

An accompanying app lets users generate information specific to that plant. The pot itself is fitted with sensors to monitor moisture, light and temperature.

The device is expected to ship in March for $110.

Flying cars and self-driving trucks, stand aside. Companies at CES are also trying to help the mobility of your own body.

Samsung showed off an exoskeleton system called GEMS, or Gait Enhancing & Motivating Sytem. It uses small motors connected to your hips or knees to help you lift those limbs and complete exercises.

The company envisions GEMS will be helpful for people with limited mobility and those in physical therapy or rehab from surgery. But GEMS is still early in development and doesn’t yet have a release date.

Meanwhile, Startup Unlimited Tomorrow has designed a prosthetic arm created with a 3D printer. The arm senses grip and is connected to the cloud for regular, personalized software updates. Those updates help fine-tune grip and movement for each person. The arm goes on sale later this year for about $5,000.

Segway has a completely different approach to helping people with challenges getting around.

The company, known for its stand-up motorized vehicles, unveiled the S-Pod, a motorized seated scooter on two wheels that somewhat resembles the chairs from futuristic movie Wall-E. Riders sit in the pod and steer with a small controller.

The S-Pod will go on sale later this year to commercial customers. The company envisions it being used in airports or enclosed corporate campuses.