Need a faster way to travel underwater? Sublue has your back. 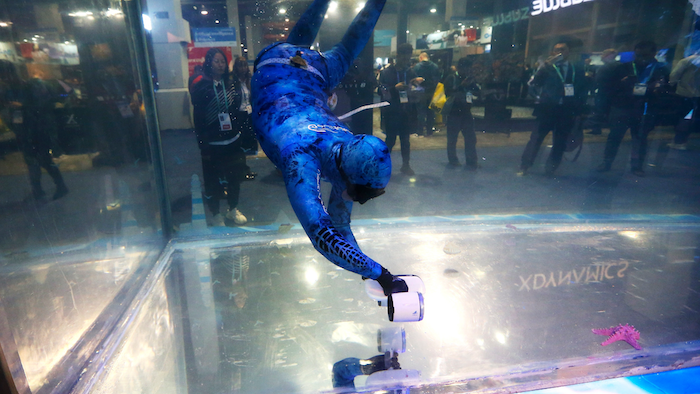 A Sublue diver moves around with the Sublue WhiteShark Mix outfitted with dual propellers for power and balance shown at their water tank booth during the CES tech show Wednesday, Jan. 8, 2020, in Las Vegas.
AP Photo/Ross D. Franklin

LAS VEGAS (AP) — Robots were front and center at the CES gadget show in Las Vegas. One even made pizza.

The annual CES technology conference in Las Vegas runs through Friday and offers a forum for companies to unveil their products and services for the coming year.

Here are some highlights:

Tucked away behind a concession stand, one robot was busy making overpriced pizzas for the hungry crowds.

“It’s not bad,” said McCord Fitzsimmons, who paid $7.50 for a pepperoni slice while the robot worked behind the register. “It’s kind of neat watching the thing do its thing.”

The robot, which resembles an assembly line, can churn out 300 12-inch pies in an hour. (The high price, though, has nothing to do with the robot's costs, but the captive audience at CES' sprawling venues.)

Humans are still needed to make lunch. A worker with an iPad tells the robot what type of pizza to make and then slides a frozen crust on the conveyor belt. As the crust goes down the line, sauce, cheese, sausage and other toppings fall from above and onto the crust. A worker then needs to put the pie in the oven, take it out when it’s done and slice it up.

Picnic, the startup behind the robot, said it's also assembling pizzas at T-Mobile Park in Seattle, where the company is based.

Pizza shop owners can customize the machine and add whatever crusts or ingredients they want.

Besides pizzas, Picnic said the robot could be reconfigured to make wraps or salads for restaurants. 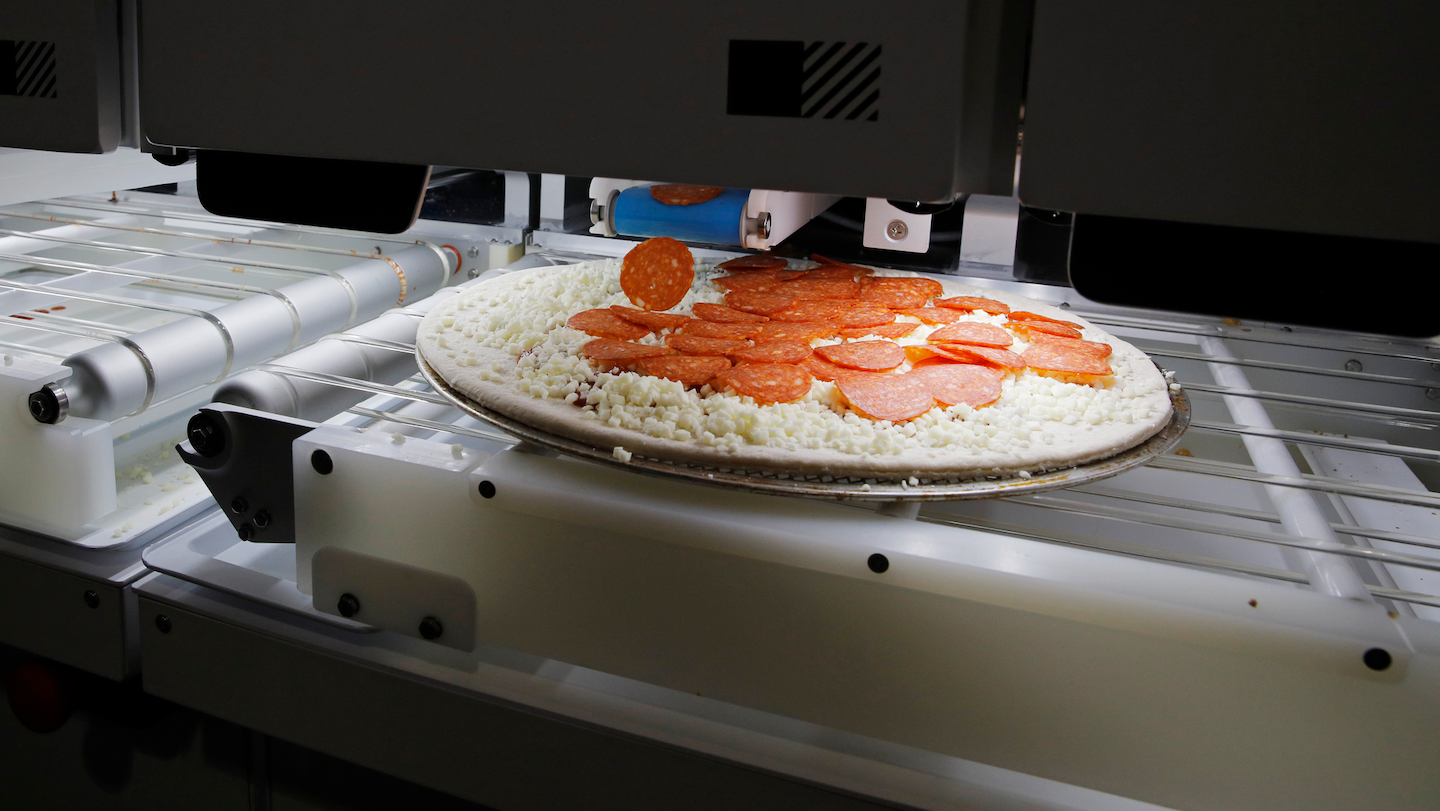 Need a faster way to travel underwater? Sublue has your back.

The company makes handheld scooters for underwater use. Just press two buttons for the battery-powered motors to start, and you’re on your way.

Sublue’s scooters are mostly made for professional use — for divers or other underwater explorers. But the company is working on a less expensive model for casual water adventurers, one it expects will cost $500 to $600.

On the CES floor, Sublue had a huge glass tank pool where onlookers gawked at a professional diver showing off the scooters.

The scooter comes with a strap so you don’t lose it. There's also a mount for your phone, hopefully encased in a waterproof covering.

Land scooters have gained popularity in urban areas in recent years, garnering both praise for their small size and ease of use and pushback for crowding sidewalks and streets.

At least underwater, there’s a smaller chance of traffic accidents — for now.

How focused are you, really?

At BrainCo’s booth, people wearing headbands equipped with EEG sensors move toy cars around a racetrack using only their minds.

The company, which was incubated at Harvard Innovation Lab, uses the headband to convert electro signals into a numeric scale of 0 to 100 to tell how hard someone is focusing. The cars moved faster as people hit higher numbers.

BrainCo makes the headbands for athletes, including the USA Weightlifting team, to test their focus levels and get them in the right headspace for training. The company says that using mind games before workouts — and meditation afterward — can make athletes more effective, without altering their training.

Traditionally, EEG measurements are used medically — but BrainCo says it collects more than 1,000 data points from the headband, which it uses to measure the person's mental state.

BrainCo also sells the headbands to schools so teachers can get a real-time look at how students are responding to lessons. But it's not currently on sale for individual consumers. 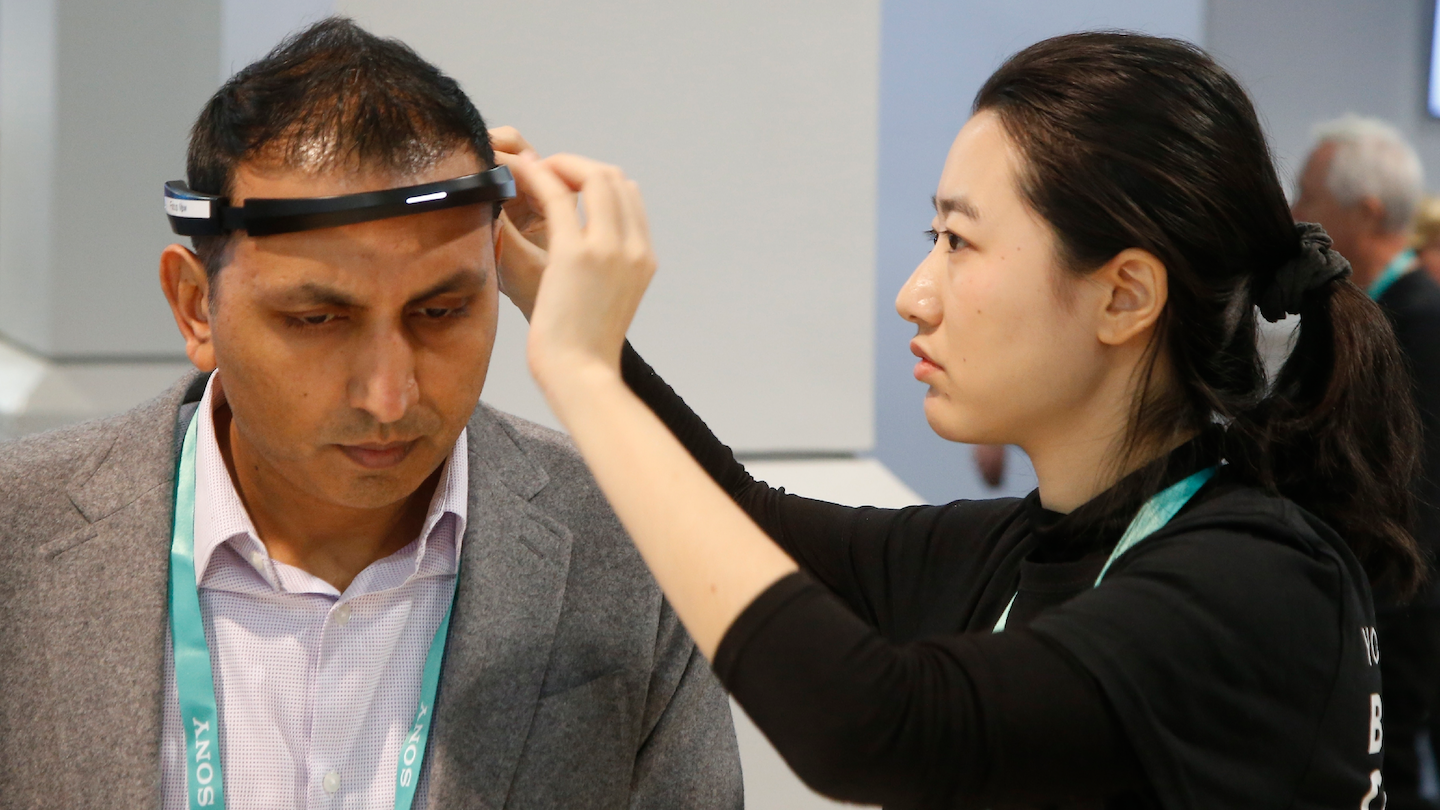