CEO Rajeev Suri said that risks previously flagged regarding the initial phase of the rollout of the high-speed 5G networks are "now materializing" for Nokia. 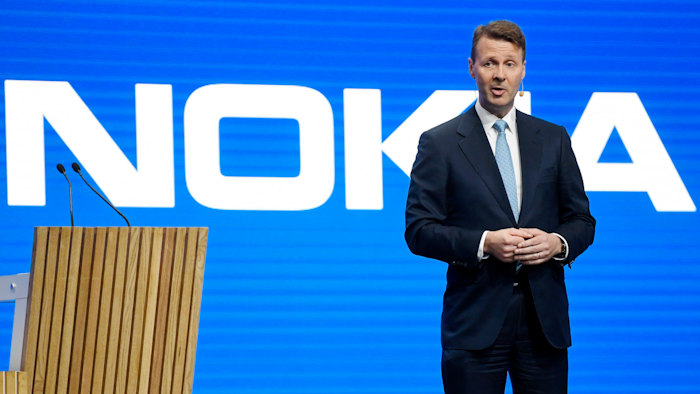 In this file photo dated May 30, 2018, Nokia's Chairman Risto Siilasmaa speaks during a shareholder's meeting in Helsinki, Finland.
Antii Aimo-Koivisto/Lehtikuva FILE via AP

HELSINKI (AP) — Finnish tech company Nokia warned Thursday that its profits will be lower than expected due to tough competition and costs related to new-generation 5G networks, about which mobile operators are cautious amid global concerns about cybersecurity.

The company based in Espoo, Finland, reported a 14% decline in third-quarter net profits to 267 million euros ($296 million), though sales were up 4% at 5.7 billion euros.

The share price dropped 20% to 3.79 euros in Helsinki as Nokia said it would stop dividend payments to boost investments into 5G. It pledged to resume them after its cash position improves.

CEO Rajeev Suri said that risks previously flagged regarding the initial phase of the rollout of the high speed 5G networks are "now materializing" for Nokia. He said there was "pricing pressure" in closing initial 5G deals, reflecting operators' reluctance to pay premium prices for the new network technology that allows ultra-fast downloading speeds.

"We expect that we will be able to progressively mitigate these issues over the course of next year," Suri said in a statement. "To do so, we will increase investment in 5G in order to accelerate product roadmaps and product cost reductions, and in the digitalization of internal processes to improve overall productivity."

Nokia said it has 48 commercial 5G deals and 15 live networks, roughly on par with Swedish competitor Ericsson but clearly lower than Chinese market leader Huawei, which has however been shadowed by allegations of spying and security concerns.

Nokia didn't comment on Huawei's current woes but noted that "some customers are reassessing their vendors in light of security concerns, creating near-term pressure (for Nokia) to invest in order to secure long-term benefits."

Huawei, the world's biggest maker of telecom network gear, has been at the center of a furious geopolitical battle between the U.S. and China. The U.S. government has been lobbying allies in Europe and elsewhere to shun Huawei over concerns its equipment might aid Chinese electronic spying, claims that the company has consistently denied.

Earlier this month, the European Union warned that 5G networks face a range of cyber threats, including from hostile countries.

While steering clear of singling out Huawei, an EU security risk assessment identified "states or state-backed actors" as the most serious and likely culprits to carry out sophisticated attacks on new 5G networks.

The report didn't name specific countries. It only briefly mentioned Huawei as one of the main suppliers of 5G equipment, alongside with Nokia and Ericsson - the three main companies that dominate the network business.