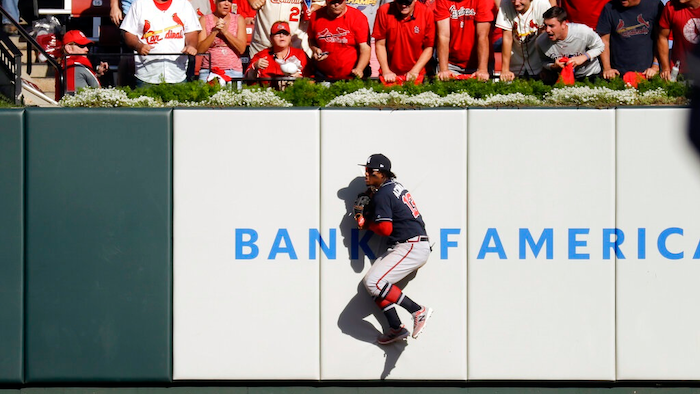 The St. Louis Cardinals' front office says baseballs have suddenly lost their juice this postseason, supporting a claim from a prominent data scientist that the balls have changed following a historic, homer-friendly regular season.

Cardinals manager Mike Shildt said Saturday that St. Louis' analytics department has found the ball is flying 4 ½ fewer feet on average in the postseason. Players in both leagues have been stunned when hard-hit balls have fallen on the warning track this month, raising more questions about the makeup of the baseballs after hitters clubbed a record 6,776 home runs in the regular season — a rise attributed to unusually far-flying balls.

"I mean there's probably all kind of different theories behind that that I won't really get into," Shildt said before a 3-1 loss to Washington in Game 2 of the NL Championship Series. "Just the fact of the matter, it could be any number of things."

The numbers don't leave much doubt, says data journalist Rob Arthur. He was among the first to suggest tweaks to the ball may have caused home runs to spike as early as 2015, and he thinks something is off with this year's October model, too.

Arthur published a story Thursday at Baseball Prospectus showing the postseason balls have more air resistance than the regular season balls, according to data pulled from MLB's own tracking system. Arthur projected home runs were down 50% through Wednesday's games compared to what would have been expected in the 2019 scoring environment, even though the average temperature for playoff games was higher than the regular season to that point.

"The data is conclusive in showing that the playoff baseball is very different from the one used in the regular season," Arthur wrote.

Major League Baseball released a statement Thursday claiming no meaningful changes have been made.

"The baseballs used in Major League Baseball are manufactured in batches," it said. "Balls that are used in the postseason are pulled from the same batches as balls used in the regular season. Regular season and postseason balls are manufactured with the same materials and under the same processes. The only difference is the postseason stamp that is placed on the ball. As has been previously acknowledged, however, the drag of the baseball can vary over different time periods."

Fueled partly by studies from Arthur and others, players and observers have become distrustful of the ball in recent years. Houston Astros ace Justin Verlander and other pitchers have claimed MLB juiced the balls intentionally to boost scoring, creating a cascade of side effects including increased strikeouts and an abandonment of small-ball strategies like stolen bases and bunting.

Commissioner Rob Manfred has denied deliberately adjusting the baseball but has acknowledged this year's ball had less drag, leading to more home runs. Manfred recently reconvened scientists from an MLB-commissioned 2018 study of the baseballs, and he plans to issue a report on their most recent findings after the World Series.

Shildt revealed his front office's conclusion after being asked about a hard-hit flyout by Cardinals slugger Marcell Ozuna in Game 1 of the NLCS a night earlier. Ozuna crushed a ball to center field off Washington's Aníbal Sánchez, and Shildt was surprised when it was caught short of the warning track.

Ozuna hit the ball 105.8 mph and with a 36-degree launch angle — a quality of contact with a 68% home run probability, per MLB's Statcast. A first-pitch temperature of 45 degrees may have been a factor.

Ozuna hasn't been the only batter fooled out of the box. Most notably, Braves youngster Ronald Acuña Jr. was scolded after failing to run out a long fly in the NL Division Series. Los Angeles Dodgers manager Dave Roberts was confused by a few long flies from his hitters, saying the ball "seems a little different."

Yankees manager Aaron Boone said Saturday he hadn't seen Arthur's report or Shildt's comments, but he planned to check with his own analytics team about it.

"I'm going to ask our guys what we've got," Boone said. "There may be a couple of balls in Minnesota that seemed like maybe they could have gone a little further. Whether that's the cooler weather, those kind of things, I don't know. I'm just hearing about this now. I don't know what to make of that."

Verlander, as outspoken as anybody about the juiced ball, said Saturday he hasn't noticed a change, but said "who knows?"

"I think MLB just came out with a report they haven't changed, right? I guess we've got to believe that, right?" he said with a grin.

Houston manager AJ Hinch also said he hadn't noticed a difference, and he didn't seem to care what happened with the baseball.

With one key exception.

"I hope every ball the Yankees hit is deflated," he said.