With India poised to become the world's fifth-largest economy, the government is eager to show off the country's prowess in technology. 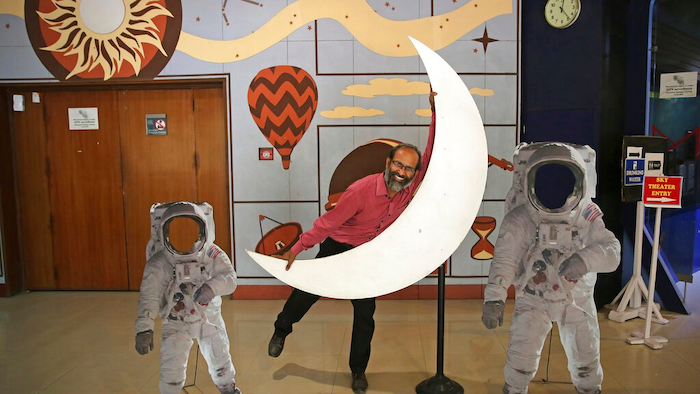 An employee playfully hugs a cut-out of a crescent moon at the Nehru Planetarium in New Delhi, India, Thursday, July 11, 2019. India is looking to take a giant leap in its space program and solidify its place among the world’s spacefaring nations with its second unmanned mission to the moon, this one aimed at landing a rover near the unexplored south pole.
AP Photo/Altaf Qadri

NEW DELHI (AP) — India is looking to take a giant leap in its space program and solidify its place among the world's spacefaring nations with its second unmanned mission to the moon, this one aimed at landing a rover near the unexplored south pole.

The Indian Space Research Organization plans to launch a spacecraft using homegrown technology on Monday, and it is scheduled to touch down on the moon Sept. 6 or 7. The $141 million Chandrayaan-2 mission will analyze minerals, map the moon's surface and search for water.

It will "boldly go where no country has ever gone before," ISRO said in a statement.

With India poised to become the world's fifth-largest economy, the ardently nationalist government of Prime Minister Narendra Modi is eager to show off the country's prowess in security and technology.

India successfully test-fired an anti-satellite weapon in March, which Modi said demonstrated the country's capacity as a space power alongside the United States, Russia and China. India also plans to send humans into space by 2022, becoming only the fourth nation to do so.

The country's ambitions are playing out amid a resurgent space race.

The U.S. — which is marking the 50th anniversary this month of the Apollo 11 mission that made Neil Armstrong and Buzz Aldrin the first humans on the moon — is working to send a manned spacecraft to the lunar south pole by 2024. In April, an unmanned Israeli craft crashed into the moon in a failed attempt at the first privately funded lunar landing.

Decades of space research have allowed India to develop satellite, communications and remote sensing technologies that are helping solve everyday problems at home, from forecasting fish migration to predicting storms and floods.

India's first lunar mission, Chandrayaan-1, whose name is Sanskrit for "moon craft," orbited the moon in 2008 and helped confirm the presence of water. In 2013-14, India put a satellite into orbit around Mars in the nation's first interplanetary mission.

Some have questioned the expense in a country of 1.3 billion people with widespread poverty and one of the world's highest child mortality rates. But author and economic commentator Gurcharan Das said that the cost of the second moonshot is small compared with India's overall budget and that the project could have a multiplier effect on the economy.

He called on India to get the country's private sector more involved in research and development, which he said could yield "huge benefits" beyond the realm of space travel.

The spacecraft will have a lunar orbiter, lander and a rover. The lander will carry a camera, a seismometer, a thermal instrument and a NASA-supplied laser retroreflector that will help calculate the distance between the Earth and the moon.

The lunar south pole is especially interesting because a much larger portion of it is in shadow than the north pole, presenting a greater possibility of water. Water is an essential ingredient for life, and finding it is part of science's broader goal of determining whether there is life elsewhere in our solar system.

This will be the first rover to look for water at the south pole.

"These days, it has become the place to go," said space expert N. Rathnasree.