The two breadbox-sized scooters, playing goalie and kicker, were from the team called "Wings of Storm." 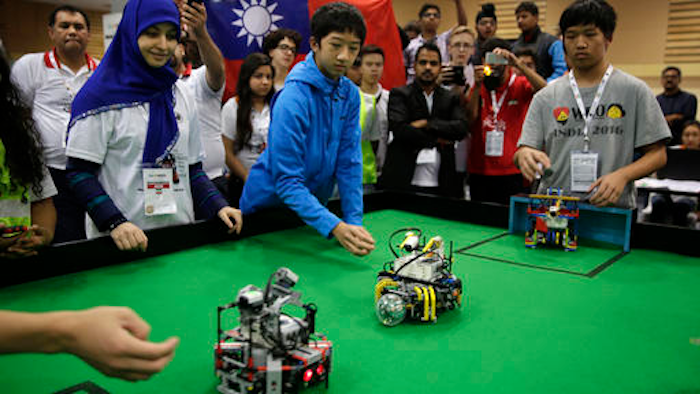 In this Sunday, Nov. 27, 2016, photo, participants from Taiwan watch their robots playing a soccer match during the World Robot Olympiad in New Delhi, India. The weekend games brought more than 450 teams of students from 50 countries to the Indian capital.
AP Photo/Tsering Topgyal

The two breadbox-sized scooters, playing goalie and kicker, from the team called "Wings of Storm" were up against another Taiwanese team's robots in the "Football" category of the World Robot Olympiad held over the weekend in the Indian capital of New Delhi.

"We have been practicing since primary school," said Liaw Jia-wun, 15, thrilled to have won with his teammate. "We never in our lives could think that we would win the world championship."

Other categories at the robotics championships — attended by more than 450 teams from 50 countries — asked participants to create robotics solutions to reduce or recycle waste, leading teams to build robots that emptied trash bins or scooped up building debris for future use.

Some participants were as young as 6 years old, while others were approaching university graduation.

In the more advanced robotics category, robots had to be preprogrammed for the automated challenge of picking up mini bowling balls and knocking down pins. That meant the robots had to sense where the target was and hit it without any intervention from their creators.

The idea is to teach students computer programming as robotics moves beyond factory applications to everyday functions, said engineer Dominic Bruneau, the head coach for the Canadian teams.

"More and more, we will be interacting with robots" in our daily lives, Bruneau said. The student engineers are not just working on theory but are "doing practical work of building real stuff and trying to solve problems."

"We start with the fundamentals. We believe that if kids can start from a very young age ... it teaches them how to build," she said. "Then it teaches them logical thinking. How to change something quickly."