This generator doesn't need much wind to generate power. 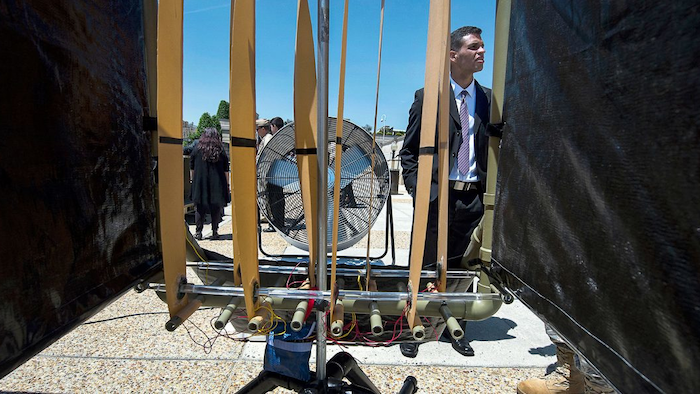 Axy Pagan-Vasquez, a mechanical engineer with the U.S. Army Corps of Engineers, explains how low-velocity wind energy is being captured using flexible strips of material during the Department of Defense Lab Day at the Pentagon. The US Army Corps of Engineers' Engineer Research and Development Center is developing the technology for use in conditions beyond suitable for wind turbines.
EJ Hersom/DoD

A patent was issued to the U.S. Army Corps of Engineers on Tuesday for a novel generator that buzzes in a light breeze.

The prototype generator, built at the Corps' Engineer Research and Development Center, has a base structure made of PVC piping that supports eight elastic strips mounted vertically on rotating tensioning tubes.

The strips are positioned in parallel with the wind's direction and their front-to-back elasticity gives them a constant serpentine wiggle, which moves an embedded copper induction coil across a smooth pipe containing magnets. Wiring transmits the induced electricity from the coil generators to a power converter and output where it can be used for all sorts of work.

Optionally, guide planes can be attached to funnel more air current over the flaps and a stiffening bar can be added to at the midpoint of the elastic flaps, which "enhances the generation of serpentine motion by providing an increased surface area for the fluid without hindering the serpentine motion," according to the patent.

In a 2014 report, Marsh and Feickert wrote that the idea for the fluid generator was initially inspired by "common Venetian blinds, fluttering in the gentle breeze of an open window..."

In coordination with the Army's technology transfer program, Marti Elder, a senior technology manager at TechLink and invention licensing expert, is seeking entrepreneurs or businesses that would make, use, or sell the generator commercially.

Elder said that the Corps of Engineers's technology, scaled up, could expand the geographic boundaries of wind energy production to places with historically low winds, and noted that the blade-less design has a reduced impact on birds and bats.

"The market for renewable energy isn't going away, and neither is the military's interest in powering expeditionary forces," she said. "With a working prototype, the business opportunity is evident and exciting."

Licensing inquiries can be sent to Marti Elder at marti.elder@techlinkcenter.org or she can be reached by telephone at 406-586-7621.

Solar Controller Could Save Millions