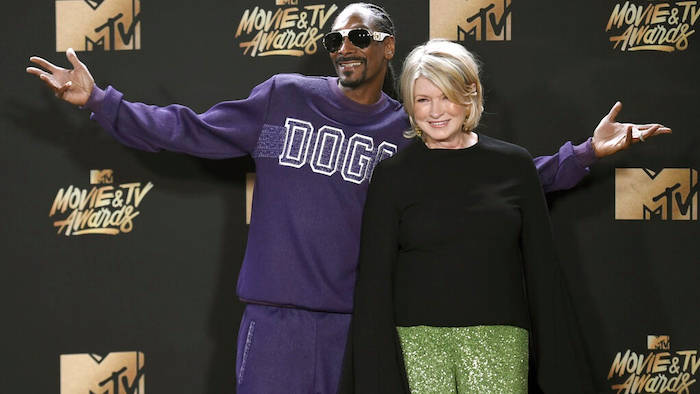 In this May 7, 2017 file photo, Snoop Dogg, left, and Martha Stewart pose in the press room at the MTV Movie and TV Awards in Los Angeles. The domestic diva is now partnering with Canada's Canopy Growth Corp. to develop new products containing CBD, a compound derived from hemp and marijuana that doesn't cause a high. Stewart's tie-up with Canopy may not be a surprise to her fans. In 2015, she baked brownies on "The Martha Stewart Show" with marijuana aficionado Snoop Dogg, and hinted that Snoop could add a little weed if he wanted to.
Photo by Richard Shotwell/Invision/AP, File

No, you're not smoking something. Martha Stewart has entered the fast-growing — but still legally murky — cannabis market.

The domestic diva who brought us hemp yarn is now partnering with Canada's Canopy Growth Corp. to develop new products containing CBD, a compound derived from hemp and marijuana that doesn't cause a high.

First to come, she said, will be a "sensible product for pets." Neither Stewart nor Canopy Growth is saying if that would be a dog or cat treat, an infused pet food or some other product. They also aren't saying when and where the products will go on sale, partly because they still face regulatory hurdles. Even Canada, which legalized marijuana last year, is still working out the rules for CBD-infusion in foods.

The U.S. legalized hemp cultivation at the end of last year, but the U.S. Food and Drug Administration recently warned that is still illegal to add CBD or THC — the compound that gives pot its high — to human or animal food and transport it over state lines. It has also cracked down on CBD-infused products that make health claims.

Starting in October, New York City will fine restaurants if they offer CBD-infused food or drinks. California has also banned hemp-derived CBD as a food additive.

Still, most in the cannabis industry expect those hurdles will eventually fall as the federal government clarifies the law and public opinion changes. Already, 33 U.S. states allow adult-use of medicinal marijuana.

The global market for legal and illegal cannabis is estimated at $150 billion today, according to Euromonitor; by 2025, it estimates the legal market alone will be worth $166 billion.

Others are already in the pet space despite the FDA's warnings. Earlier this week, Denver-based cannabis company Dixie Brands said its pet wellness brand, Therabis, will begin selling hemp-based CBD soft chews for cats in April. It has been selling dog treats since 2016.

Stewart's tie-up with Canopy may not be a surprise to her fans. In 2015, she baked brownies on "The Martha Stewart Show" with marijuana aficionado Snoop Dogg, and hinted that Snoop could add a little weed if he wanted to.

The next year, Stewart and Snoop began hosting the VH1 talk show "Martha and Snoop's Potluck Dinner Party." Marijuana is often part of the banter. When they made sushi with smoked eel, for example, Stewart noted that the smoker would seem familiar to Snoop.

"She had to be sure we were competent because her reputation is of great value," Linton told The Associated Press.

Stewart was unavailable for comment Thursday, according to a spokeswoman for Sequential Brands Group, Inc., which licenses Stewart's products.

Linton said Stewart lends important credibility to the company as it helps pave the path to legal cannabis globally. It's not yet clear how her name will be used. Rules on celebrity endorsements and branding differ between Canada and the U.S., Linton said.

Kelly O'Keefe, a marketing professor at Virginia Commonwealth University's Brandcenter, said there's not much risk to Stewart. If her reputation was going to take a blow, it would have happened when she partnered with Snoop Dogg. Instead, he said, that partnership has helped her look more youthful, relaxed and connected.

"She's already taken a walk on the wild side," he said.

Stewart could also help Canopy Growth and the larger cannabis industry reach new audiences, says Giadha Aguirre de Carcer, the CEO of New Frontier Data, a cannabis research firm. In a study last fall, New Frontier found that the fastest-growing group of cannabis users is older females whose kids are grown, not the tie-dyed hippies of old. They want brands they can trust with nice packaging — which is Stewart's expertise.

"She is nailing it. This is her audience," Aguirre de Carcer. "This is an underserved demographic that is growing very fast and is willing to pay."