Use your fingerprint to slash the time it takes to pick up a rental car. 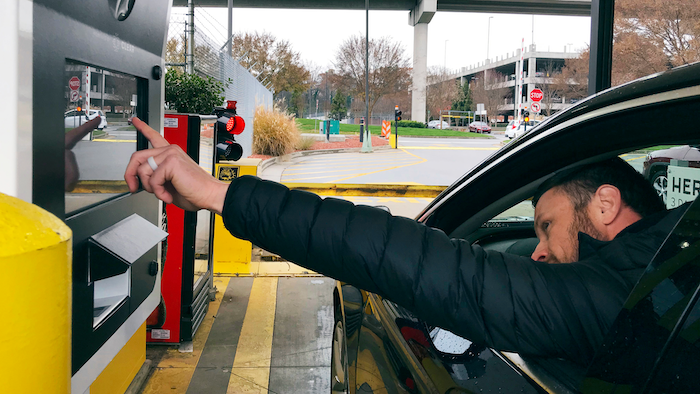 In this Friday, Dec. 7, 2018, photo, a rental car driver demonstrates a new biometric scanning machine by placing his finger on the reader at the Hertz facility at Hartsfield-Jackson Atlanta International Airport, in Atlanta. In a first for the rental car industry, Hertz is teaming up with Clear, the maker of biometric screening kiosks found at many airports and stadiums. Hertz says the partnership will slash the time it takes to pick up a rental car.
AP Photo/Jeff Martin

Biometric screening is expanding to the rental car industry.

Hertz said Tuesday it is teaming up with Clear, the maker of biometric screening kiosks found at many airports, in an effort to slash the time it takes to pick up a rental car. Clear hopes it will lead more travelers to its platform, which has 3 million members in the U.S.

It's the latest place consumers will find biometric technology, which has migrated over the last 50 years from secure government facilities and banks to airports, stadiums and even smartphones that unlock with the touch a fingerprint. Hertz is the first rental car company to use the technology.

Improvements in cameras and other technology have made it cheaper to install scanners that can read fingerprints, faces, and irises. More than 100 airports worldwide use biometric readers from Clear, Vision-Box and other companies to scan passengers. Walt Disney World verifies visitors' identity by scanning fingerprints.

And the advancements will likely keep coming. Microsoft is working with Australia's national bank on cardless ATM machines that would let people withdraw cash using a facial scan and personal identification number. Universities in London and Copenhagen have on-campus groceries that let students pay with their finger. Some laptops can now be unlocked with a fingerprint scan.

Hertz Gold Plus Rewards loyalty program members with access to Clear will be able to bypass the counter, pick up their car and head to the exit gate. There, Clear pods equipped with cameras and touchscreens can read their face or their fingerprints. If they match up with Hertz's reservation data, the gate will open. Hertz will have at least one lane dedicated to Clear members at each location.

"In the world of travel, I think time is of the essence," she said.

The service is free for members of the Gold Plus Rewards program, which also has no fee. Travelers can sign up for Clear at a Hertz location. To upgrade to airport service, which promises to move Clear members through security lines more quickly, travelers must pay a monthly fee of $15.

Clear says it's the first time it will be identifying members based on their face instead of their iris or their fingerprints. Clear CEO Caryn Seidman-Becker says the cameras can take measurements and identify minute differences in facial features.

Amil Jain, a professor at Michigan State University who researches biometrics, says facial screenings work by comparing an original photo to a new one. That could be tough in a rental car lane, where the lighting may differ substantially and drivers could be wearing makeup or winter scarves that change their features.

"If you don't do the biometrics right, you'll turn off the customer more," he said. But biometric scanning done well could be more robust and secure than having an employee see if a driver's face matches their license, he said.

Jain doesn't think customers need to be particularly worried about facial scans. He points out that millions of people have shared photos of their faces on Facebook and other platforms already.

"Once your biometric data gets leaked or compromised, you can't really do anything about it," he said. "The more people who potentially have it, the more potential for things to go bad."

Seidman-Becker said Clear will not sell or share the data it collects. She noted that the company has been certified by the U.S. Department of Homeland Security.

But Jeramie Scott, the national security counsel for the Electronic Privacy Information Center, said sharing biometric data is still risky, because there are no federal laws governing the collection, use and retention of biometric data.

"An individual might sign up for one use only to find out that down the road their data is being used in another manner," he said.

Marinello said Clear approached Hertz about the partnership and Hertz agreed to pay for the installation of the Clear pods. Marinello wouldn't say how much Hertz is investing, but said the company expects to recoup that through increased customers and return visits.

Hertz has been eager to adopt new technology and partner with other companies in an effort to prove there is still a future in rental cars despite pressure from ride-hailing companies and self-driving cars. It's a partner with Volvo in an autonomous driving incubator in Israel, for example.

Clear, too, has been trying to boost its membership through partnerships after Seidman-Becker bought it out of bankruptcy in 2010. Delta Air Lines bought a 5 percent stake in the company in 2016 and offers discounted Clear membership rates for its frequent fliers.