Shipwreck From Only WWII Battle in America Found off Alaska

An explosion ripped the stern off the USS Abner Read, also covering many of the men in oil, which prevented some from being rescued. 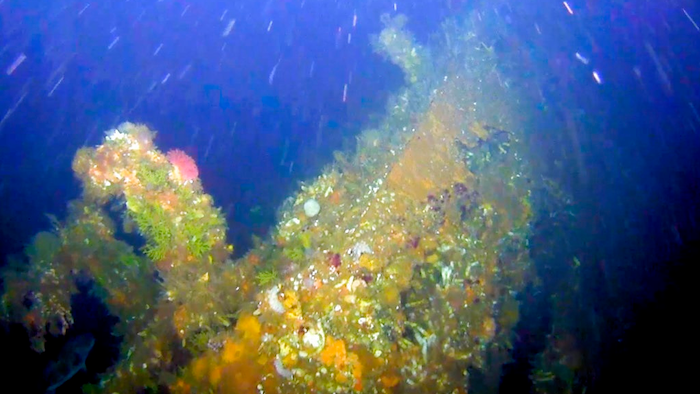 This July, 2018 photo from video provided by Project Recover shows a gun shows a portion of the coral-encrusted stern of the destroyer USS Abner Read in the waters off Kiska Island, Alaska. The Abner Read hit a mine left by the Japanese after they abandoned Kiska Island in Alaska's Aleutian Islands in 1943, ripping the stern off. But the ship never sank and was refitted and returned to duty. Now, 75 years after the ship's 75-foot stern broke off, it has been located off Kiska by a team of scientists funded by the U.S. government.
Project Recover via AP

ANCHORAGE, Alaska (AP) — Daryl Weathers remembers trying to pull men from the sea off Alaska's Aleutian Islands after a U.S. Navy destroyer hit a mine left by the Japanese following the only World War II battle fought on North American soil.

The explosion, which ripped the stern off the USS Abner Read, also covered many of the men in oil, which prevented some from being rescued.

"They were so slippery, you couldn't get ahold of them," the 94-year-old Weathers said this week from his home in Los Angeles.

The remaining 250 crew members made the ship watertight, and it limped back to the West Coast for repairs. Only one body among the 71 men killed was recovered.

The scientists from Scripps Institution of Oceanography at the University of California, San Diego, and the University of Delaware found it last month during a research mission funded by the National Oceanic and Atmospheric Administration.

The researchers confirmed the discovery with a remotely operated craft, which provided high definition video in real time to those on the research ship.

"To hit success is obviously extremely joyous for everybody. There's lots of cheering you know, it's like scoring a touchdown," said Andrew Pietruszka, an underwater archaeologist with Scripps.

The euphoria ended with the realization that it was the final resting place for U.S. service members. Those aboard the research vessel held a wreath-laying ceremony to honor the dead.

There are no plans to raise the stern.

"We take the protection of these wrecks seriously because we believe that they are war graves," said Paul Taylor with the Naval History and Heritage Command.

The original stern of the Fletcher-class destroyer named for a naval officer killed in the Civil War lay on the seafloor near Kiska Island for three-quarters of a century. The area is a crowded underwater remnant of the Battle of Attu, which became known as WWII's forgotten battle, though it was the only fought in North America.

Japanese forces took Attu Island in June 1942 and captured about 45 Aleuts as prisoners of war. U.S. forces reclaimed Attu on May 30, 1943, after a bloody battle that left nearly 2,500 Japanese and 550 Americans dead.

The Abner Read was sent to look for Japanese submarines. During one of the ship's figure 8 maneuvers, the explosion blew off the stern.

"We thought it was a submarine that got us with a torpedo," Weathers said. "We were waiting for another torpedo."

Weathers said the crew put boats in the water to help rescue the men.

It was nearly impossible to pull the men covered in oil into boats unless they were wearing life jackets, which gave rescuers something to grab onto.

"The water was so cold, you were only good for a few minutes in there, then you had hypothermia," Weathers said. "They just give up. I seen the guys just say, 'Oh, forget it,' and just quit swimming."

After getting a new stern, the ship fought in the South Pacific until Nov. 1, 1944, when a Japanese plane dropped a bomb on the rear engine room and then dive-bombed the deck, striking the gun Weathers had been manning.

The kamikaze attack during the Battle of Leyte Gulf in the Philippines sank the destroyer, killing 22 sailors.

Weathers said he knows he's one of the lucky ones, twice surviving attacks on the Abner Read. First launched in 1942, the ship had a "short life, but it was very active," he said.

USS Cooperstown Gets a Keel

Shipwreck From 1899 Found in Lake Erie

Shipwreck from 1800s Uncovered During Construction