Shipwreck From 1899 Found in Lake Erie

The Margaret Olwill was loaded with limestone and bound for Cleveland when it went down in a storm. 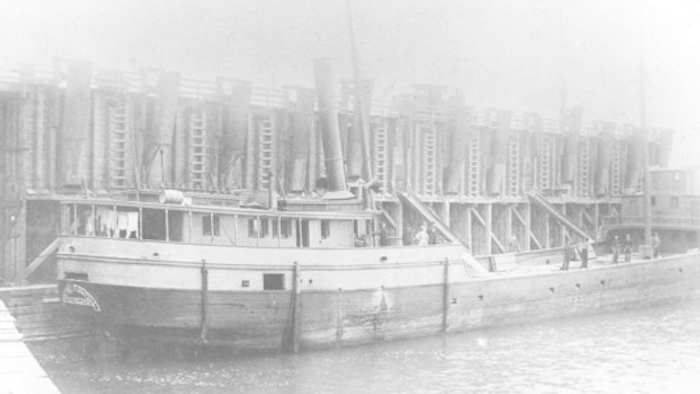 The Margaret Olwill was built in 1887 and wrecked in Lake Erie, off the shore of Lorain, in 1899. Five people died on the trip from Kelleys Island to Cleveland.
Historical Collection of the Great Lakes, Bowling Green State University

TOLEDO, Ohio (AP) — The wreckage of a steamer that sank in Lake Erie over a century ago and eluded shipwreck hunters for decades has finally been found off the Ohio shore, according to the National Museum of the Great Lakes.

The steam barge, called the Margaret Olwill, was loaded with limestone and bound for Cleveland when it went down in a storm in 1899, killing eight people including the captain, his wife and their 9-year-old son.

Shipwreck hunter Rob Ruetschle, who first looked for the barge nearly 30 years ago, discovered its remains last summer. He and others later confirmed the identity of the wreckage, the museum said.

Lake Erie is the shallowest of the Great Lakes and littered with shipwrecks from an era when people and cargo often traveled by water. But its violent storms that can whip up in a hurry have taken down hundreds of schooners, freighters and steamships over the years.

How many wreckage sites are below the surface is not known — estimates vary from several hundred to several thousand.

A small group of shipwreck hunters known as the Cleveland Underwater Explorers researches the locations of many suspected wrecks and typically finds a few every year.

"We keep knocking those off and the list is getting shorter," said David VanZandt, the group's director. "Sometimes we stumble across ones when we're looking for others."

The Olwill steam barge has been one of its targets for a long time.

Ruetschle, who now lives in Santa Monica, California, but returns to Ohio in the summers to search for shipwrecks, decided a few years ago to take another run at finding the steamship.

He poured over old wreck reports, newspaper accounts and court records looking for clues. His search in 2016 came up empty, so he moved on to another area last summer.

That was when he came across the Olwill near Lorain, about 30 miles (48 kilometers) west of Cleveland.

"It's sort of like climbing Mount Everest for the first time," Ruetschle said about how he felt. "Once you find it, it's just fantastic."

Ruetschle and other members of the Cleveland Underwater Explorers completed a couple of dives at the site, concluding it was indeed the Olwill based on what they saw, the wreck's location and the historical accounts of the sinking.

Four survivors who were found holding onto the wreckage, according to newspaper reports, said the ship was attempting to turn back during the storm when it was caught between waves and rolled over.

"Every time we find a shipwreck, it adds a little more to the bank of knowledge we have about Great Lakes history," said Christopher Gillcrist, executive director of the Great Lakes museum in Toledo. "There are so many stories out there."

Shipwreck From Only WWII Battle in USA Found

Shipwreck from 1800s Uncovered During Construction