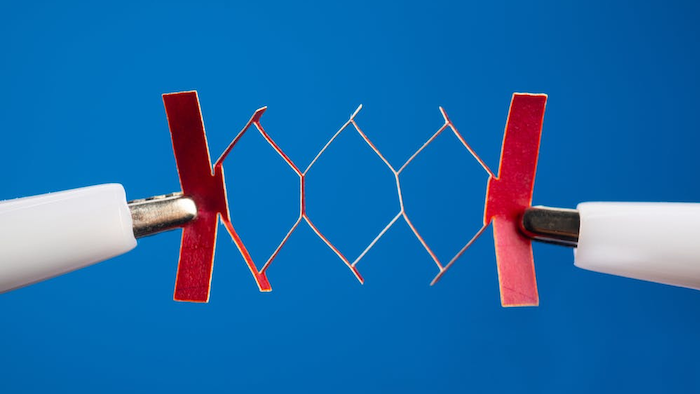 A stretchable electronic device whose design is inspired by the cut-paper art called kirigami.
Doug Levere/University at Buffalo, CC BY-ND

After a few decades of electronics developing at a dizzying pace – from personal computers and flip phones to wearable devices, smartphones and tablets – there are signs technological breakthroughs are stalling.

For instance, your new iPhone really isn’t that much different from the previous one. And laptop computers pretty much all look – and work – alike.

Engineers need new inspirations for innovations. One source, believe it or not, is ancient arts. My work, for example, is inspired by the kirigami, a lesser-known cousin of the folding art of origami. You may even have done kirigami as a child, folding and cutting to make paper snowflakes.

Materials inspired by these arts can be used to improve smart clothing, build bendable smartphones and make prosthetics lighter.

The word kirigami is the English name for the art of paper cutting. Archeologists say kirigami can be traced back before the 17th century in Japan. It is still a popular folk art in Asian countries, where people make kirigami to celebrate the lunar new year, newborn babies, marriage and other significant events.

Typically, kirigami starts with a folded paper base, which is cut, unfolded and flattened to make the final art piece. The intricate patterns create beautiful works of art based on math and design principles that can change the mechanical behaviors of the material being cut. For example, a particular pattern can make the paper stronger or more stretchable.

Just as kirigami practitioners cut and fold paper, engineers can cut and fold materials that in turn can be incorporated into electronic devices.

Recent innovations in energy-efficient electronics have created portable electronic devices, high-performance electronic-ink paper, artificial electronic skin and smart fabrics. But many of these creations depend, at least in part, on traditionally printed circuit boards, which are typically made of silicon and metals. They’re hard and brittle – not a good match for the human body. People need clothes and paper and items that can handle bends and curves.

The research community, as well as tech and apparel companies, is eager to make electronic devices as flexible and bendable as possible. The trick is to make sure the flexibility of these gadgets does not limit their ability to handle electricity.

Recently, my research group at the University at Buffalo fabricated a novel kirigami-inspired stretchable electronic device. Made of self-assembled polymers and nanowires, the device is a centimeter wide. On its own it could stretch slightly – to just 1.06 centimeters.

But when cut with lasers in a pattern inspired by kirigami, the same device can stretch up to 20 centimeters, 2,000 percent larger than its unstretched form. The material’s innate elasticity helps, but the pattern and orientation of the cuts is the major factor in how the device deforms.

Moreover, the cutting made the device 3,000 times more conductive of electricity, meaning the electronics can run faster, or take less time to charge.

There are many otherelectronicsresearchers inspired by kirigami. As our groups and others refine these sorts of materials, they can eventually be incorporated into electronic skin – akin to temporary tattoos – to improve the feel of prosthetics and robots. Hospitals can also use e-skin patches to wirelessly monitor patients’ vital signs, replacing those annoying wires that can get tangled or prevent people from sleeping while resting in bed.

Stretchable electronics are also key to Samsung’s plans to release a bendable smartphone. And they could be central to smart clothing, an industry that analysts project could be worth US$4 billion by 2024.

Thanks to artistic innovations hundreds of years ago, clothes and bandages may one day be able to help athletes maximize performance, monitor the health of people with chronic illnesses, and give soldiers and emergency workers important information about themselves and those in their care.

This article was originally published on The Conversation. Read the original article here: http://theconversation.com/ancient-arts-are-inspiring-modern-electronics-100506.