People are now less likely to be trapped by collapsed seats and floors. 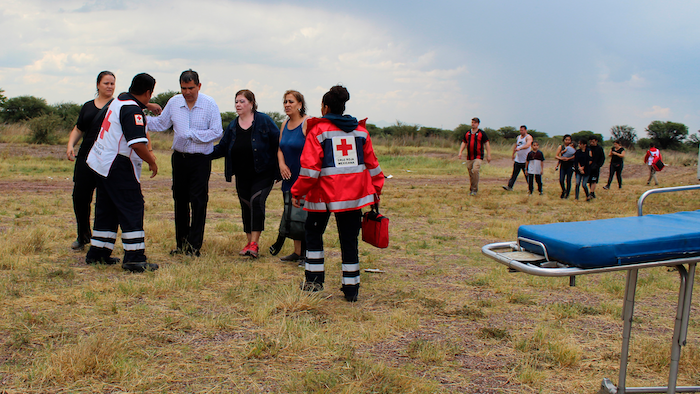 In this photo released by Red Cross Durango communications office, Red Cross workers attend airline passengers who survived a plane crash, as they walk away from the crash site in a field near the airport in Durango, Mexico, Tuesday, July 31, 2018. An Aeromexico jetliner crashed while taking off during a severe storm, smacking down in a field nearly intact then catching fire, and officials said it appeared everyone on board escaped the flames.
Red Cross Durango via AP

FRANKFURT, Germany (AP) — Passengers in plane crashes like the Aeromexico accident — in which no one died — have better chances of survival due to better aircraft construction and safety standards, experts say.

Air safety investigator Adrian Young, from the Netherlands-based consultancy To70, said Wednesday that crash survival rates "are higher than they have ever been" in part because "airplanes are stronger than ever."

People are now less likely to be trapped by collapsed seats and floors, especially if the plane comes to rest more or less level and the accident occurs on flat ground and at lower speeds, as in the crash in northern Mexico. He told The Associated Press it was too early to speculate about the cause.

Other improvements in recent decades include interior materials that burn more slowly and don't give off poisonous gases, and better airport construction that eliminates obstacles near runways.

Young cautioned as well that "good fortune is crucial in any accident."

Authorities said there were no fatalities among the 97 passengers and four crew members aboard the Embraer 190 jet that crashed Tuesday. Rescuers took 49 people to hospitals, most with minor injuries.

The lack of a death toll recalls a 2008 crash landing by a British Airways Boeing 777 short of the runway at London's Heathrow Airport. All 152 passengers and crew survived.

A year later, in the so-called "Miracle on the Hudson," a U.S. Airways Airbus 320 made an emergency landing in the waters by Manhattan after losing power upon takeoff.

In 2013, there were no deaths when a Lion Air 737 jet missed the runway in Bali, Indonesia, and crashed into the sea. And only 2 of 302 passengers from an Asiana 777 died when the plane crashed on landing in San Francisco.

To70s safety review for 2017 indicated the year was the safest on record for airline passengers, with 13 lives lost in propeller-driven aircraft and no jets crashed in passenger service anywhere in the world.