How Plants Can Monitor Home Health?

The idea is to genetically engineer house plants to serve as subtle alarms when something is amiss. 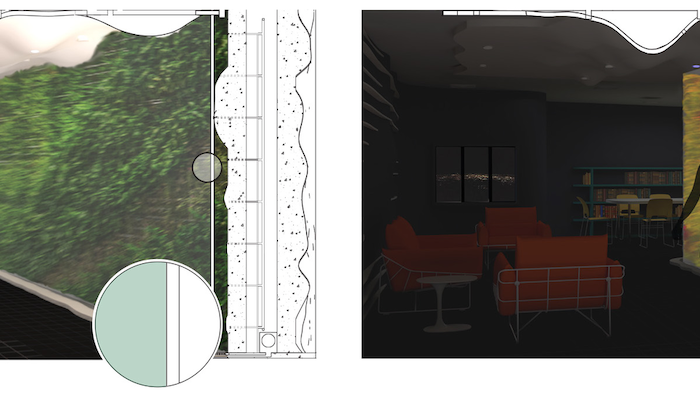 These are perspective images of a conceptual phytosensor (plant) wall. Shown left is the lighted room, and shown right (view below) is the darkened room under sense-and-report photonic conditions. The glass partition (inset on left) concentrates HVAC return air across fungal VOC-sensing houseplants. The inset image on the right shows an engineered Nicotiana plant for constitutive expression of GFP yielding green fluorescence under built-in blue or UV lights next to a wild type red fluorescent plant under the same conditions.
Francisco Palacios, Susan G. Stewart and Rana Abudayyeh

KNOXVILLE, Tenn. - In a perspective published in the July 20 issue of Science, Neal Stewart and his University of Tennessee coauthors explore the future of houseplants as aesthetically pleasing and functional sirens of home health.

The idea is to genetically engineer house plants to serve as subtle alarms that something is amiss in our home and office environments. Stewart, a professor of plant sciences in the UT Herbert College of Agriculture - who also holds the endowed Racheff Chair of Excellence in Plant Molecular Genetics - came up with the idea during conversations with his wife, Susan, and Rana Abudayyeh, an assistant professor in the UT College of Architecture and Design's School of Interior Architecture. Both Susan Stewart and Abudayyeh are coauthors of the article. Susan Stewart recently graduated from the school as a non-traditional, re-entry student, and Abudayyeh was among her professors.

These are perspective images of a conceptual phytosensor (plant) wall. Shown left is the lighted room, and shown right is the darkened room under sense-and-report photonic conditions. The glass partition (inset on left) concentrates HVAC return air across fungal VOC-sensing houseplants. The inset image on the right shows an engineered Nicotiana plant for constitutive expression of GFP yielding green fluorescence under built-in blue or UV lights next to a wild type red fluorescent plant under the same conditions.Photo (inset, right) by Francisco Palacios. Design renderings by Susan G. Stewart and Rana Abudayyeh.

This is not the first time that plants have been proposed as biosensors. The authors point out that to date several environmentally relevant phytosensors have been designed by using biotechnology. In fact, what was once known as genetic engineering has grown into a whole field of study called synthetic biology, which is the design and construction of new biological entities or systems.

Synthetic biology is a valuable tool for agricultural production, allowing farmers to grow plants designed to resist drought or certain pests, and Neal Stewart has authored or coauthored several studies involving the engineering of plants to react to certain conditions, like the presence of too much or too little nitrogen. Such plants "glow" when viewed with specifically designed filters. Once this technology is commercialized, it may allow farmers of the future to adjust their management plans accordingly.

What is new, and which the authors discuss in the Science article, is the concept of applying synthetic biology to houseplants beyond aesthetic reasons, like larger blooms or variegated foliage. "Houseplants are ubiquitous in our home environments," says Neal Stewart. "Through the tools of synthetic biology it's possible for us to engineer houseplants that can serve as architectural design elements that are both pleasing to our senses and that function as early sensors of environmental agents that could harm our health, like mold, radon gas or high concentrations of volatile organic compounds." Stewart explains that plant biosensors could be designed to react to harmful agents in any number of ways, such as gradually changing the color of their foliage or through the use of fluorescence. "They can do a lot more than just sit there and look pretty," he says. "They could alert us to the presence of hazards in our environment."

The authors postulate that dense populations of biosensors would be needed, so architectural design elements like "plant walls" might best serve as environmental monitors while also serving our innate need to connect with nature even while indoors.

"Biophlic design builds on our innate affiliation with nature, so integrating biophlic elements within the interior volume carries rich implications spatially and experientially," says Abudayyeh. "Building responsive capabilities into interior plants is revolutionary. It allows biophlic elements within space to assume a more integral role in the space, actively contributing to the well-being of the occupant holistically."

"Our work should result in an interior environment that is more responsive to overall health and well-being of its occupants while continuing to provide the benefits plants bring to people every day," says Abudayyeh. "I'm thrilled that my students will be part of this breakthrough research as they integrate this kind of innovation into designing interior spaces. "This long-term project is a unique and intriguing partnership between two seemingly unrelated disciplines, interior architecture and plant sciences," Abudayyeh continues.

As the authors indicate in the Science article, the potential benefits to society of such collaborative research are enormous.