We just don't see their many failed attempts. 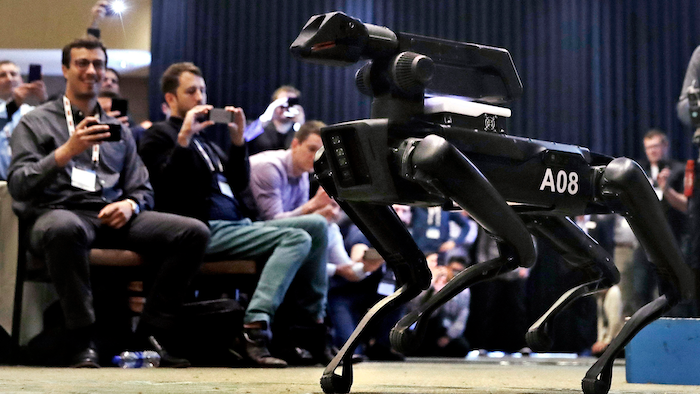 In this Thursday, May 24, 2018, photo, a Boston Dynamics SpotMini robot is walks through a conference room during a robotics summit in Boston. It's never been clear whether robotics company Boston Dynamics is making killing machines, household helpers, or something else entirely. But the secretive firm, which for nine years has unnerved viewers with YouTube videos of robots that jump, gallop or prowl like animal predators, is starting to emerge from a quarter-century of stealth.
AP Photo/Charles Krupa

BOSTON (AP) — If you've ever watched a YouTube video of a Boston Dynamics robot, you probably remember it. But you may not know what the videos leave out.

Millions of people have watched the humanoid Atlas jogging through a field, or the intimidating, 6.5-foot-tall Handle zip back and forth swiftly (and ominously) on wheeled legs.

Then there's the dog-like SpotMini dexterously opening a door — a machine so unsettling it inspired a nightmarish episode of the TV show "Black Mirror" last year.

All of these robots are real, but the videos can sometimes be misleading. Interviews with several former employees — and public comments by Boston Dynamics CEO Marc Raibert — help illustrate what's really going on.

Can Robots Really Do That?

Probably. But what you don't see are their many failed attempts.

"The videos are an accurate representation of the best trials of the robots," said one former Boston Dynamics employee, who asked not to be named out of concern over endangering career prospects in the small and tight-knit U.S. robotics community.

What doesn't make the cut in those YouTube clips, he added, are the many "blooper reels" shared internally. Spoiler alert: Walking robots fall down a lot.

Do The Robots Do All This On Their Own?

Rarely. The videos typically don't show a nearby human test engineer with special remote control systems that guide the robots through their activities. On-stage demos, however, give the game away.

But the human assist is no longer always necessary. In May, the secretive firm posted its first video of the SpotMini robot autonomously navigating a predetermined route through an office. The robot had already built a map of the route during manual testing using cameras mounted on its front, back and sides.

Are They Meant to Be Scary?

Only if you want them to be, Raibert told a gathering of engineers at the Boston Robotics conference in May.

"Even though there's a lot of blog headlines that say the robots are scary, if you look at our YouTube videos you see a lot of people like them," Raibert said. "That makes me wonder, are people really afraid? Or is it afraid like in a horror movie when you're afraid on purpose?"

Won't They Run Out of Power?

Yes. The firm's first commercial robot, the SpotMini, is all electric. It can run for 90 minutes at a time.

But the battery is "so easy to remove" that the robot could recharge itself, Raibert said. He said engineers are also testing a maneuver where another robot can help recharge its robotic companion.

Why So Many Videos?

The YouTube videos started off by accident when a non-employee posted a video of the company's BigDog pack mule robot about a decade ago, according to former employees who worked there at the time.

It got so much attention that the firm started its own YouTube channel, which now has 32 videos — one with nearly 30 million views.